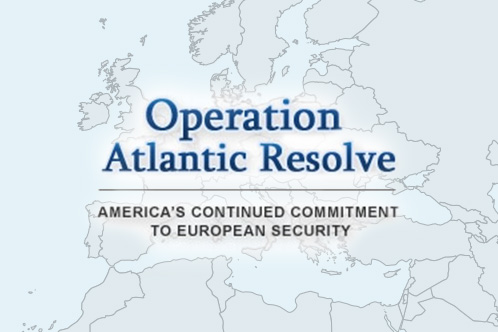 The United States continues to demonstrate its commitment to the collective security of our NATO allies and support for our partners in Europe, in light of the on-going Russian intervention in Ukraine.

All U.S. efforts in support of our NATO allies and partners in Europe fall under the umbrella of OPERATION ATLANTIC RESOLVE.

The U.S. took several immediate steps to demonstrate solidarity with our NATO allies, such as augmenting the air, ground and naval presence in the region, and enhancing previously scheduled exercises.

Russia’s aggressive actions have already led many to call for reinforcing NATO’s readiness through Article 5-related planning, training, and adjustments to force posture.

The U.S. is also taking additional measures to enhance NATO military plans and defense capabilities and remains committed to maintaining a persistent presence in Eastern Europe.

We look forward to additional commitments by our allies, to ensure a coordinated and continuous land, air, and sea presence in the region at least through the end of the year.

On June 3, President Obama called on Congress to support a European Reassurance Initiative of up to $1 billion, which will enable us in the next year to undertake measures to:

Increase exercises, training, and rotational presence across Europe but especially on the territory of our newer allies. Many of the U.S. air and ground forces participating in these activities would rotate from the United States.

As we have done in Poland, deploy detachments of U.S. planners to augment the capability of our allies to design and host a broad range of training opportunities.

Increase responsiveness of U.S. forces to reinforce NATO by exploring initiatives such as prepositioning of equipment and improving reception facilities in Europe.

Increase participation by the U.S. Navy in NATO naval force deployments, including more persistent deployments to the Black and Baltic seas.

Build the partner capacity of close friends such as Georgia, Moldova, and Ukraine so they can better work alongside the United States and NATO, as well as provide for their own defense.

This initiative will build on existing tools and authorities and will be included in the Department of Defense’s FY 2015 Overseas Contingency Operations (OCO) request to Congress. . . .

Exercise Rapid Trident 14: Originally planned for July in Ukraine, is tentatively moved to 14-25 September. Anticipate up to 14 nations will participate but that has yet to be solidified. This change in no way diminishes the importance of this exercise to our command or our NATO partners. The exercise was moved because during the initial planning phase, which occurs months in advance, the legitimate gov’t of Ukraine was beginning to deal with Russian aggression which rightfully meant their defense forces were focused elsewhere. Rapid Trident is an annual Ukrainian-led, U.S. Army Europe-supported situational training exercise and battalion field training exercise designed to train a U.S.-Ukrainian combined battalion headquarters with a peace support operations scenario.

Exercise Sea Breeze 14: (August, Black Sea) U.S. forces, along with other partner nations. This annual event, in its 17th iteration, is co-hosted by U.S. and Ukrainian navies, and aims to improve maritime security in the Black Sea through increased interoperability and cooperation among regional Allies and partners.

Exercise Jackal Stone 14: (Aug 22-28 in Hohenfels, Germany) Coordinated by the U.S. through Special Operations Command Europe (SOCEUR) and is primarily a partnership building exercise. Its objective is to provide special operations forces the opportunity to train together and build mutual respect amongst each other while sharing doctrinal concepts, training concepts and various tactics, techniques and procedures.

Image: Operation Atlantic Resolve is a series of actions designed to reassure NATO allies and partners (graphic: Department of Defense)