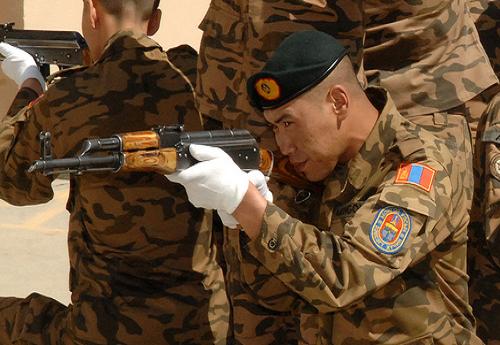 From Mark Larson, the New York Times:  What do the Greek, Mongolian, Latvian and British Armies have in common? They’ve all been in Afghanistan before: the Greeks under Alexander; the Mongols under Genghis Khan; the Latvians as part of the Soviet Union; and the British more than a few times. They are also current members of the International Security Assistance Force, and contribute troops to the coalition mission in Afghanistan. …

The Mongolians, for certain, provide the most extraordinary example of international support. That Mongolia — a landlocked country of just three million people, nearly half of whom still lead a nomadic life — provides any aid at all to the international force is remarkable.

While there are only a few dozen Mongolian soldiers in the country helping to train the Afghan National Army, the country’s contribution is relatively substantial considering that its military only numbers around 7,000 (less than a single American division).

The Mongolians’ presence around camp also provides a novel experience for the many members of ISAF who are unfamiliar with their distinct culture. While some of the Mongolians struggle with English, their friendliness and dedication does not get lost in translation. Also their presence provides an excellent excuse for the DFAC (dining facility, that is) to have Mongolian BBQ night.

First Lt. Mark Larson is serving with the 10th Mountain Division in Kabul and has written blogs at www.handfulofdust.net. The views expressed in this blog are those of the author and do not reflect the official policy or position of the Department of the Army, Department of Defense, or the United States government.  (photo: ISAF)