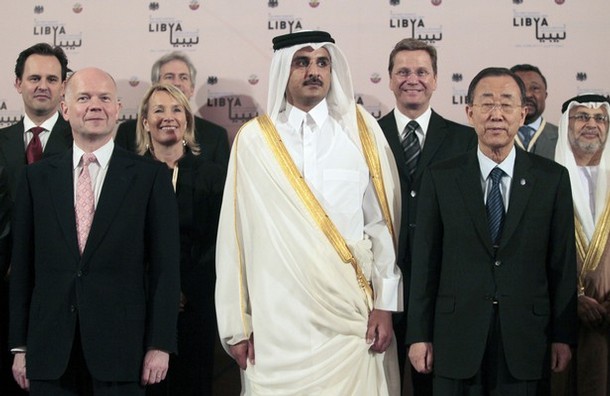 From the New York Times:  But, before the gathering opened here [Doha, Qatar] on Wednesday, Mahmoud Shamman, a spokesman for the insurgents, reinforced the French and British criticism , saying: “When the Americans were involved, the mission was very active and it was more leaning toward protecting the civilians.”

“NATO is very slow responding to these attacks on the civilians. We’d like to see more work toward protecting the civilians,” The Associated Press quoted him as saying. …

Meantime, as some allies privately hope for the return of the American-led ground-attack missions, other coalition partners have expressed concern that their supplies of precision-guided bombs are running low after more than 800 strike missions. …

The American delegation to the meetings in Doha will be led by Under Secretary of State William J. Burns. Secretary of State Hillary Rodham Clinton, who met with the Jordanian foreign minister and the emir of Qatar in Washington on Tuesday, will attend a NATO meeting in Berlin on Thursday.

The separate meetings in Qatar and Germany are themselves a sign of the bifurcated political and military leadership of the coalition, whose members remain divided over the means of the operation, if not the end: a political transition in Libya that sees the removal of Colonel Qaddafi.

Several European and NATO diplomats acknowledged on Tuesday that NATO’s initial handling of the air campaign has been plagued with problems and miscommunications. But these officials insisted that with improving weather and lessons learned from a week’s worth of hard knocks, the tempo of operations was steadily improving.

NATO is now flying just under 200 aircraft, with the United States supplying about 40 refueling, reconnaissance and other specialized planes that few if any other countries have. The United States also has about 40 aircraft in reserve, including tank-killing A-10s and AC-130 gunships.

The diplomats said that after a rough start, NATO was getting better at attacking mobile targets by identifying them accurately and quickly and relaying that information to the warplanes. “There is a learning curve, but we are progressing,” a French diplomat said. “The Americans are not indispensable.”  (photo: Reuters)