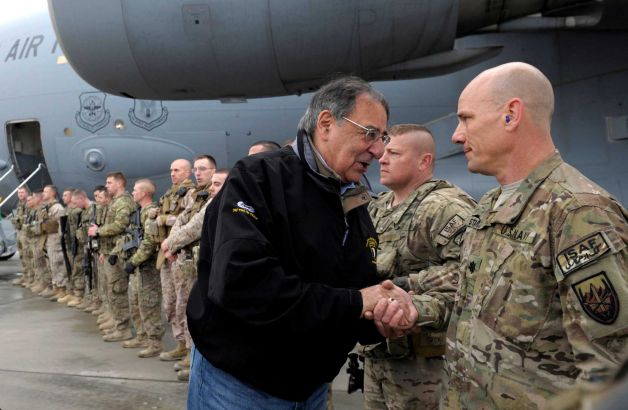 The American batteries will be part of a broader push to beef up Turkey’s defenses that will also include the deployment of four other Patriot batteries — two from Germany and two from the Netherlands.

All six units will be under NATO’s command and are scheduled to be operational by the end of January, according to officials in Washington.

George Little, the Pentagon spokesman, said Mr. Panetta signed the order as he flew from Afghanistan to this air base in southern Turkey, close to the border with Syria.

“The United States has been supporting Turkey in its efforts to defend itself,” Mr. Little said.

The order “will deploy some 400 U.S. personnel to Turkey to support two Patriot missile batteries,” Mr. Little added, and the personnel and Patriot batteries will arrive in Turkey “in coming weeks.” He did not disclose where the Patriots would be located. . . .

He said the United States was working with Turkey, Jordan and Israel to monitor Syria’s stockpiles of chemical weapons, and warned of “serious consequences” if Syria used them, but he did not offer any specifics.

“We have drawn up plans for presenting to the president,” Mr. Panetta said. “We have to be ready. . . .”

NATO nations do not have enough batteries to cover all of the sites. With tensions building with Iran and North Korea defying the United States and its Asian allies by launching a long-range rocket, American officials did not want to send more than a few Patriot batteries to Turkey, especially since it is not clear how long they will be needed. . . .

The United States, Germany and the Netherlands are the only NATO members that have the advanced PAC-3 Patriot system.  (photo: Susan Walsh/AP)