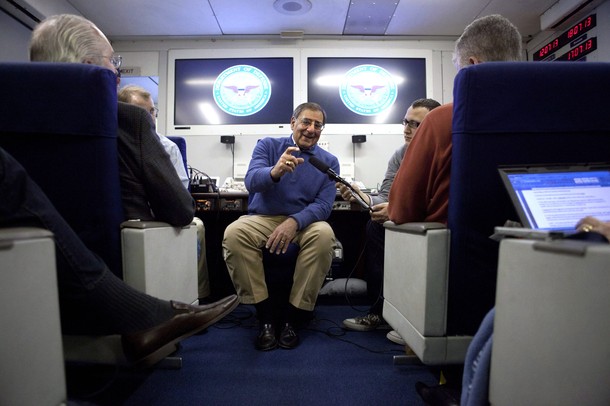 From Craig Whitlock, the Washington Post:  The United States and NATO will seek to end their combat mission in Afghanistan next year and shift to a role of providing support and training to Afghan security forces , Defense Secretary Leon E. Panetta said Wednesday.

U.S. military commanders had said in recent weeks they would begin a transition this year toward taking more of an advisory role as Afghanistan’s national army and police take greater responsibility for fighting the insurgency. But Panetta’s remarks were the first time the Obama administration has said it could foresee an end to regular U.S. and NATO combat operations by the second half of next year.

“Hopefully by mid to the latter part of 2013 we’ll be able to make a transition from a combat role to a training, advise and assist role,” he told reporters traveling with him to Brussels, where he is scheduled to attend NATO meetings this week. . . .

Panetta said U.S. and NATO forces would remain in Afghanistan until the end of 2014, the deadline NATO has fixed for ending its role in the war. The Pentagon chief said U.S. troops would likely remain in Afghanistan for an indefinite period beyond that to carry out counterterrorism missions and continue to support Afghan security forces.

“We’re committed to an enduring presence there,” he said.

Although Panetta said the ambition to end combat missions next year was in keeping with the original NATO timetable for ending the decade-long war, his announcement was the latest sign that the U.S. and its allies are seeking to hasten that process.  (photo: Getty)