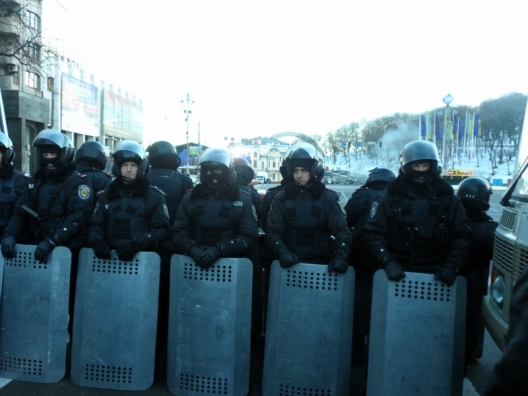 The Yanukovich regime had drawn up plans for a massive crackdown on protesters in Kiev using thousands of police and troops – and the chief of Ukraine’s armed forces on Thursday last week ordered 2,500 army troops into the capital for an “antiterrorist” operation. . . .

The documents, which a senior official confirmed were genuine to the Financial Times late on Tuesday, were among large numbers of government papers beginning to emerge in the wake of president Viktor Yanukovich’s dramatic ousting on Saturday. . . .

But the most chilling were military and security papers. One set revealed that snipers who killed dozens of protesters on Kiev’s central square last Thursday came from Ukraine’s “Omega” special forces.

The incendiary documents could bolster efforts by Kiev’s acting government to build a criminal case against Mr Yanukovich, whose whereabouts were still unknown on Monday, for “mass murder of peaceful civilians. . . .”

A cable signed by Yuri Ilyin, chief of staff, on Thursday last week ordered three army units from southern and southeastern Ukraine to move into Kiev, based on information from Ukraine’s SBU security services that protesters were planning to capture “potentially dangerous military facilities”.

It said troops would receive further information in the capital about where they would be deployed. But the order said armed troops would set up checkpoints and have powers to inspect documents and detain those not carrying them, search clothing for weapons, limit traffic and enter private homes if they suspected “terrorists” were being concealed.

They would be authorised to use weapons and other resources. . . .

Mr Ilyin had become head of the armed forces the night before when Mr Yanukovich sacked his predecessor Volodymyr Zaman. Mr Zaman said later he had been fired for refusing to “go against the people”.

The defence ministry had provoked alarm in western capitals on Wednesday when it said the army could be used for “antiterrorist operations” in Ukraine. The authorities and legal experts had previously said the military could be used only if a state of emergency was imposed.