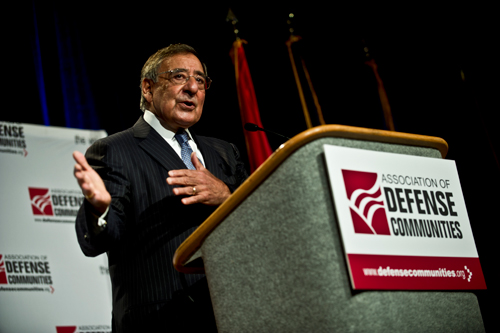 From Carlos Muñoz, the Hill:  The Defense Department (DOD) is abandoning its push for wide-scale base closures in the continental United States, focusing instead on plans to draw down military installations overseas, Secretary Leon Panetta announced Monday.

"I had no illusions that [base closures] would be an easy sell politically, but we had a responsibility … to put everything on the table," Panetta said in a speech at the annual conference of the Association of Defense Communities in Monterey, Calif. "It is now clear that there will not be a round of [closures] authorized in 2013. . . ."

Lawmakers from both sides of the aisle were quick to pounce on DOD’s most recent BRAC proposal, declaring it unacceptable the moment it hit Capitol Hill in January. . . .

Senate Armed Services Committee Chairman Carl Levin (D-Mich.) suggested there were plenty of overseas bases to close before getting to domestic ones, a sentiment echoed among several Senators at the time. . . .

Pentagon officials will forge ahead with plans to shutter several U.S. bases overseas that will no longer be needed to accommodate the smaller total force DOD plans to have in the coming decade.

The majority of those bases scheduled for closure will be in Europe, as U.S. forces begin to draw down their military footprint in that region. That presence will get smaller, as DOD’s total force is expected to shrink significantly over the next decade. . . .

"Now may not be the time for BRAC as our economy recovers, but sooner or later, one way or another, [DOD] is going to need to take a hard look at its basing infrastructure as we seek to reduce our overhead costs."   (photo: Department of Defense)