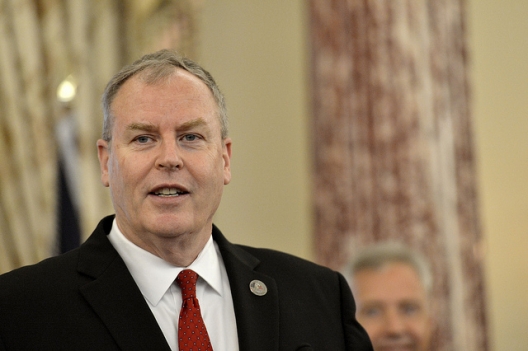 Work said the Pentagon has a new plan called “Defense Innovation Initiative” and a separate effort targeting longer-term projects to ensure that the United States continues to have a decisive competitive advantage against potential foes.

“We must coordinate and collaborate, avoid duplication, leverage niche capabilities, and push our establishments to innovate in technology, concepts, experimentation, and wargaming,” Work told a conference hosted by the Center for a New American Security. NATO members needed to make good their vows last year to spend 2 percent of national output on defense, he said….

Work said concerns about advances by other countries were a key reason that the Pentagon’s fiscal 2016 budget plan to be delivered to Congress on Monday will exceed budget caps set by Congress and reverse five years of declines in U.S. military spending.

From Claudette Roulo, DOD News:  The United States commitment to its NATO allies is unwavering in the face of Russia’s activities, the deputy secretary said.

“We are working to improve NATO’s ability to deploy faster in times of crisis, including enhancing NATO’s Rapid Response Force, and improving infrastructure and facilities to receive rapid reinforcements,” he said.

The U.S. military continues “to help build partner capacity, particularly in our NATO allies in the Baltics,” Work said. “I can announce that the department’s FY 2016 budget request provides for close to $800 million to continue these activities, and expand them, under the European Reassurance Initiative….”

“While the Defense Innovation Initiative and a third offset strategy is a U.S. initiative, it will also require a deliberate, aggressive effort on the part of our allies,” Work said….

A growing resource gap is closely related to concerns within NATO of the technology gap, he said.

“All of us together need to decide this innovation effort is a priority, that this is a deliberate effort, and that we can’t float along with the current,” the deputy secretary said. To secure the international environment, he said, it is imperative allied leaders fulfill the pledge made at the Wales Summit to devote 2 percent of their national outputs to defense.