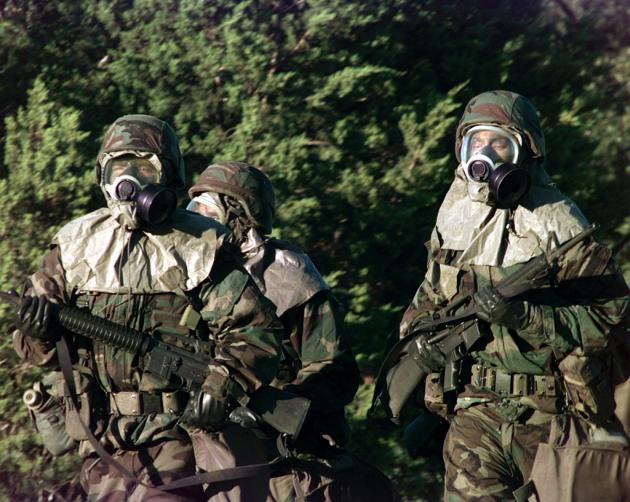 From David E. Sanger and Eric Schmitt, New York Times:  The Pentagon has told the Obama administration that any military effort to seize Syria’s stockpiles of chemical weapons would require upward of 75,000 troops , amid increasing concern that the militant group Hezbollah has set up small training camps close to some of the chemical weapons depots, according to senior American officials.

The estimated size of the potential effort, provided to the White House by the military’s Central Command and Joint Staff, called into question whether the United States would have the resources to act quickly  if it detected  the movement of chemical weapons and forced President Obama, as he said in August, to “change my calculus” about inserting American forces into Syria. So far Mr. Obama has avoided direct intervention into the most brutal civil conflict to emerge from the Arab Spring uprisings,  and the Pentagon assessment was seen as likely to reinforce that reluctance.

The White House on Thursday declined to comment on the Defense Department’s assessment.

The Pentagon has not yet been directed to draft detailed plans of how it could carry out such a mission, according to military officials. There are also contingency plans, officials say, for securing a more limited number of the Syrian chemical weapons depots, requiring fewer troops.

The discovery that Hezbollah has set up camps close to some of the depots, however, has renewed concern that as the chaos in Syria deepens, the country’s huge chemical weapons stockpiles could fall into the wrong hands. Hezbollah fighters have been training at “a limited number of these sites,” said one senior American official who has been briefed on the intelligence reports and spoke on the condition of anonymity. “But the fear these weapons could fall into the wrong hands is our greatest concern.”

So far, there is no evidence that Hezbollah, which is based in Lebanon but has become increasingly active in protecting the government of President Bashar al-Assad, is making any effort to gain control over the chemical weapons. Its decision to train fighters close to the major chemical sites, some officials speculate, could be rooted in a bet that their camps will not be bombed if the West believes there is a risk of hitting the stockpiles.

Mr. Assad has openly threatened to retaliate beyond his country’s borders if outside forces try to break the current stalemate to unseat him, and there is renewed concern about whether he or his proxies might use the chemical weapons as their last shield. Officials say that attacks along the borders with Turkey and Israel have forced the administration to consider the risks of Syria’s troubles spreading in the region.

Mr. Obama has been clear for more than a year that he would resist direct American intervention, but in August he said one circumstance would cause him to revisit that position. “A red line for us is we start seeing a whole bunch of chemical weapons moving around or being utilized,” he said at a news conference. “That would change my calculus. . . .”

The estimation that it would take 75,000 troops to neutralize the chemical weapons grew out of what Mr. Obama, in his August news conference, referred to as extensive contingency planning for how the United States would respond if the chemical weapons were on the move or appeared vulnerable.

“The problem is that you can’t just pick this stuff up and ship it out of the country,” said one senior military official who has studied the problem. The chances of contamination of nearby Syrian towns, and of attacks on the effort to move the weapons, were simply too high. Because many of the containers holding the material are old, or of unknown reliability, the risk of leakage is high.

As a result, the official said, much of the chemical stockpiles might have to be destroyed in place. That is a lengthy, dangerous job, and would require enormous force protection around the sites. When the United States went through similar efforts to destroy its own stockpiles — under strict environmental regulations that would likely not apply in Syria — the process took years. . . .

The United States has varying estimates of how many sites exist, with the C.I.A. estimating about three dozen and the military using figures in the high 40s.  (photo: Nation/Thailand)