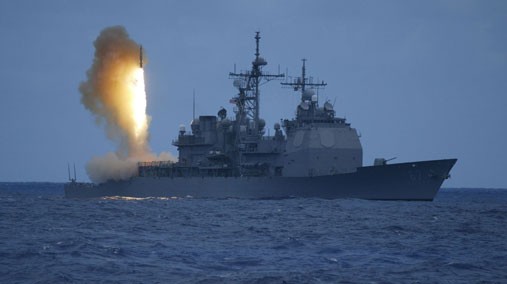 From Tony Capaccio, Bloomberg News:  The Pentagon will request $9.16 billion for missile defense programs for the 2014 fiscal year that begins Oct. 1, about $550 million less than this year’s $9.71 billion, according to internal budget figures obtained by Bloomberg News.

The missile defense proposal scheduled to be released April 10 is part of a $526.6 billion defense budget President Barack Obama will propose, according to government officials familiar with the budget plan who asked not to be named discussing it in advance.

The request is subject to congressional scrutiny and could be increased in areas lawmakers decide to give greater emphasis, such as the ground-based system of missile interceptors based in Alaska and California to protect the U.S. Last year, House members added money to start construction of a site on the East Coast. The Senate removed the funds, asking the Pentagon to conduct an environmental impact study instead.

Representative Mike Rogers, chairman of the House Armed Services Committee’s missile defense panel, said in e-mail statement: “These repeated cuts are even more troubling given the advances in nuclear weapons and missile technology by the unstable regime in North Korea. . . .”

This year’s missile defense request is lower than last year’s primarily because the administration is requesting no funding for the ground-based, mobile Medium Extended Air Defense System, or Meads, being developed by Lockheed Martin, of Bethesda, Maryland, with Rome-based Mbda Italia SpA. and Schrobenhausen, Germany-based LFK Lenkflugkoerpersysteme GmbH.