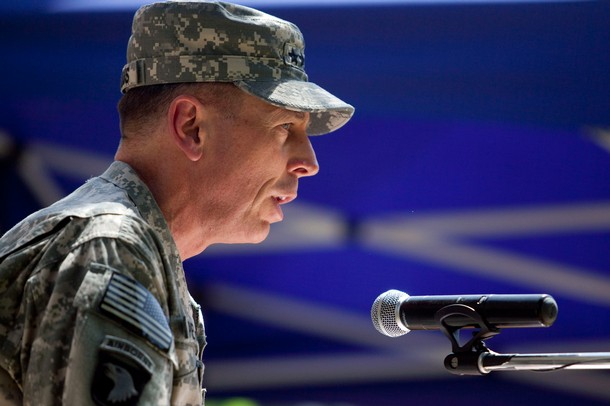 From David Stringer, the AP:  In an interview with British Broadcasting Corp. television, Army Gen. David Petraeus urged caution over hopes for the planned pullback of American troops, which is scheduled to begin in July 2011.

"That’s a date when a process begins — nothing more, nothing less. It is not the date when the American forces begin an exodus and look for the exit and the light to turn off on the way out of the room," he said, in an interview recorded in Kabul.

"It’s a date when the process of transition of some tasks to some Afghanistan forces — in those areas where conditions allow it, and at a pace allowed by the conditions — that’s what begins then," Petraeus said.

The four-star general declined to say whether he believed the start of the withdrawal may need to be delayed, but said the surge of international troops is showing signs of success. He said there had been a major impact in diminishing the Taliban’s capability in the country’s south and also around the capital Kabul.

"The reality is that the momentum that the Taliban have established over the course of recent years has been reversed in many areas of the country and will be reversed in the other areas as well," he said.

Petraeus warned, however, that further progress to force Taliban fighters out of their remaining safe havens will entail tough fighting. "It gets harder before it gets easier," he said.  (photo: Getty) (video)