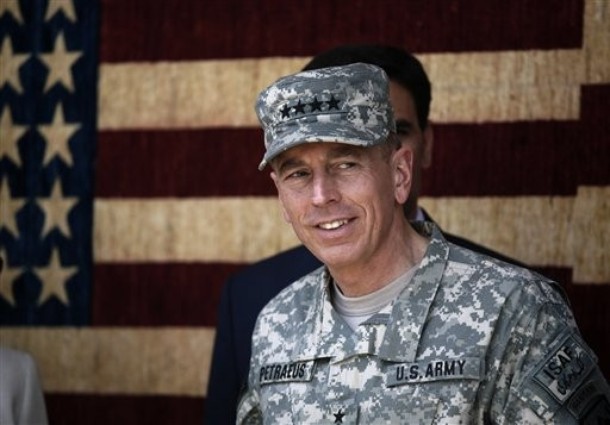 From Alan Cullison and Peter Spiegel, the Wall Street Journal:  Gen. David Petraeus took command of coalition forces under the pine trees near NATO headquarters in the Afghan capital Sunday, and called on civilian and military leaders to unite in their support for the war and show "we are in this to win. "

Despite mounting casualties and a stiff insurgency, Gen. Petraeus vowed the North Atlantic Treaty Organization coalition had a long-term commitment to Afghanistan and that "neither insurgents nor our partners in the region should doubt that. …"

For the first time on Sunday, a senior Afghan official entered the fray, with Said Jawad, the Afghan ambassador to the U.S., saying the deadline was unhelpful to the war effort and could actually make the U.S.-led effort more difficult.

Speaking on the CNN program "State of the Union," Amb. Jawad said the declared deadline sent the wrong message to the Taliban and the U.S. should instead commit publicly that it will remain in Afghanistan "to finish the job."

"If you overemphasize a deadline that is not realistic, you are making the enemy a lot more bold," Mr. Jawad said. "You are prolonging the war."

From ISAF, Letter to the Troops from Gen. David H. Petraeus:  This effort is a contest of wills. Our enemies will do all that they can do to shake our confidence and the confidence of the Afghan people. In turn, we must continue to demonstrate our resolve to the enemy.