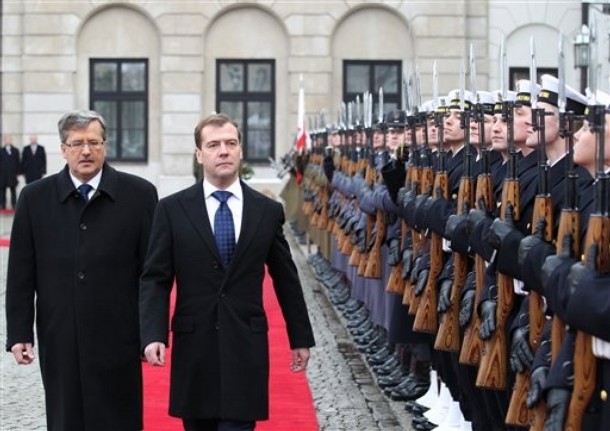 From Marcin Sobczyk, the Wall Street Journal:  According to analysts, the thaw in relations helps both sides as Poland’s previous Russophobic image wasn’t helping to build the country’s position within western structures , while its combative foreign policy obstructed the Russian Federation’s cooperation with EU and NATO partners.

“For Poland, it’s good because the country can lose its Russophobic image that Russia previously used to justify why Poland shouldn’t be listened to. But the paradox of the situation is that for both sides is not about bilateral relations, but about the relations of both countries with the West,” said Bartlomiej Sienkiewicz, independent expert in eastern European relations and a co-founder of Poland’s Center for Eastern Studies. …

Poland still relies on NATO as the principal guarantor of peace in Europe. Russia, which saw NATO as an enemy, would prefer a broader new structure. The Polish president said on Monday NATO’s priority is the security of its members, while Russia may cooperate with NATO on missile defense at a later time, if possible. But Russia insists on being fully involved in a joint defense initiative and if it can’t be, NATO’s system may in 2020 diminish Russia’s defense capacity, “and this may lead to a new arms race,” Mr. Medvedev said in an interview with Polish weekly Wprost.

Poland will walk a tightrope with Russia and rapprochement may be temporary or insincere, especially if Poland continues to pursue its policy of requesting more U.S. troops on its soil. The U.S. now has unarmed Patriot missile batteries in Poland—”potted plants,” as one Polish official once called them, complaining the batteries are tactically useless–and Russia hasn’t reacted to the deployment because the unarmed equipment won’t do harm. Unarmed for now. …

A senior Polish government official said in an interview that Poland continues to have a sober view of Russia, but no longer wants to be isolated by it. That’s why it’s now trying a different approach.

“We have no illusions about the nature of the Putin regime,” the official said. “We got tired of being the one country to stand up to Russia. Russia is our number two trading partner—we have more to lose [than other states in the EU].”  (photo: AP)