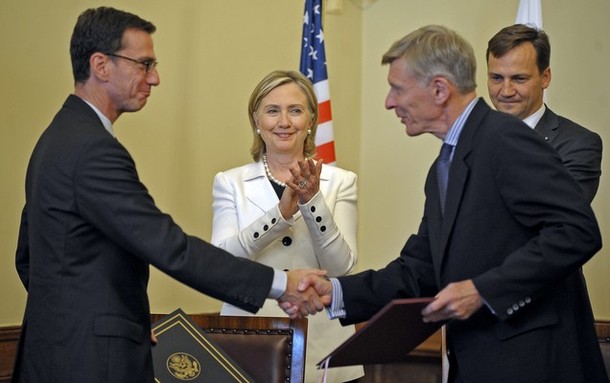 From the State Department:  SECRETARY CLINTON:  Today, by signing an amendment to the ballistic missile defense agreement, we are reinforcing this commitment. The amendment will allow us to move forward with Polish participation in hosting elements of the phased adaptive approach to missile defense in Europe. It will help protect the Polish people and all of Europe, our allies, and others from evolving threats like that posed by Iran.

FOREIGN MINISTER SIKORSKI: When President Obama announced the new configuration of the system, we did say that we liked the new configuration better, but I think you didn’t believe us. But I hope now that we have signed the annex, I hope you do believe us, because it’s based on existing technology and, therefore, is more likely to be built and to be effective. And it is capable of protecting NATO and Poland and the United States, of course, from a bigger range of threats. And we uphold declarations from the time of signing the original agreement that we want the facility to as transparent as possible. We would like the Russian Federation, in particular, to have confidence that the facility is built for the declared ends and, therefore, on a reciprocal basis, we would be happy for it to be inspected. …

SECRETARY CLINTON:  NATO has encouraged Russia to cooperate and even participate in the missile defense efforts that NATO is undertaking against what we view as common threats. Russia has not accepted that offer, but the offer stands. And the United States is beginning discussions with Russia to explore whether there are any circumstances under which the United States and Russia could work together on radar development and deployment or any other aspect of missile defense. We welcome that. We’ve encouraged that.

Thus far, there has not been a willingness by Russia to respond positively, but the door is open.