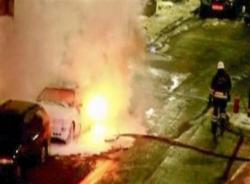 From Mia Shanley and Niklas Pollard, Reuters:  Police said on Sunday they were treating bomb blasts in Stockholm as an act of terrorism by a lone attacker that followed an emailed threat referring to Sweden’s troops in Afghanistan and to cartoons of Mohammad.

Police stopped short of calling Saturday afternoon’s blasts, which killed the suspected bomber and wounded two people, a suicide attack. A car blew up in a busy shopping area, followed minutes later by a second explosion nearby.

Shortly before the blasts, Swedish news agency TT received a threatening letter referring to Sweden’s presence in Afghanistan and caricatures of the Prophet Mohammad drawn by a Swedish cartoonist. The letter included digital sound files with a recording in broken Swedish and in Arabic.

The incident follows several nervous months in Europe after a U.S. travel alert about possible attacks by militants and a failed bid by a Yemen-based al Qaeda group to use air cargo to send parcel bombs via Europe to America. …

"This is a very serious incident, which is being investigated as an act of terrorism," Anders Thornberg, director of operations at the Security Police, said in a statement. …

A Facebook page entitled "RIP (rest in peace) Taimour Abdulwahab our brother and friend" has also been set up. …

Kohlmann said he suspected the attack was by "a home-grown local extremist who may or may not have connections to any actual terrorist organization. …"

The incident began when a car burst into flames near a busy shopping street in the city center, followed by explosions inside the car which police said were caused by gas canisters.

The second explosion, about 300 meters (yards) away and 10-15 minutes later, killed one man and wounded two people.  (photo: Reuters/Reuters TV)