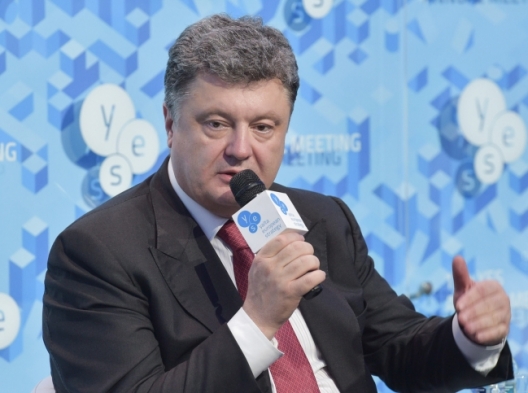 Ukraine will decide whether to join NATO in a referendum at the end of this decade once it moves from “empty declarations” and completes “real” policy changes needed for membership, President Petro Poroshenko said.

“We have worked out an intense plan for the next six years, so that the country meets the criteria to join the EU and to join NATO,” Poroshenko said in Kiev today. “And only then the Ukrainian people will decide on joining or not joining, in a referendum.”

Ukraine’s government said Sept. 26 that it seeks to join the North Atlantic Treaty Organization in the “short term.” Russian President Vladimir Putin has criticized the U.S. and European Union countries for encroaching into former communist Europe, saying they have violated agreements signed at the end of the Cold War and pose a threat to his country’s national security. . . .

NATO Secretary General Jens Stoltenberg urged Russia to pull back its forces from eastern Ukraine and respect the wobbly truce. He also said that the military alliance would stick by a 2008 decision to let Ukraine join if it eventually meets the criteria and decides to do so, even if membership isn’t being discussed now.