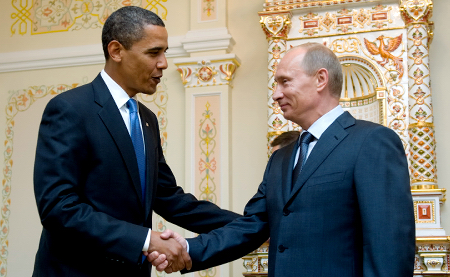 From the Editorial Board of the Washington Post:  The return of Vladi­mir Putin to the Russian presidency ought to have caused the Obama administration to reshape its policy toward the Kremlin. Putin based his election campaign in large part on anti-Americanism; he has increasingly pursued policies contrary to vital U.S. interests, such as his military support for the Syrian regime of Bashar al-Assad and his threats against NATO’s European missile-defense system.

Most important, Mr. Putin’s decade-old autocratic regime is looking shaky. Hundreds of thousands of Russians have turned out to demonstrate against fraud in the presidential and parliamentary elections, and to demand political reform. Many Russian experts are saying that the Kremlin’s economic and political policies are unsustainable, and that Mr. Putin will not finish his six-year term unless he makes major concessions to the opposition — which he shows little sign of doing.

Remarkably, however, President Obama has responded to Mr. Putin’s return to the presidency by strongly affirming his commitment to partnering with the strongman. His meant-to-be-confidential assurance to outgoing President Dmitry Medvedev on Monday, that “after my election I have more flexibility” to solve “all these issues, but particularly missile defense,” was only the latest sign that Mr. Obama has decided to bet on deal-making with Mr. Putin rather than on democratic change in Russia. . . .

Mr. Obama’s assurance to Mr. Medvedev, meanwhile, has raised a reasonable question: What “flexibility” will Mr. Obama be prepared to offer on missile defense, given that Mr. Putin surely will not be satisfied with anything short of scrapping the system or giving Russia a veto over its use?  (photo: Loeb/Getty)