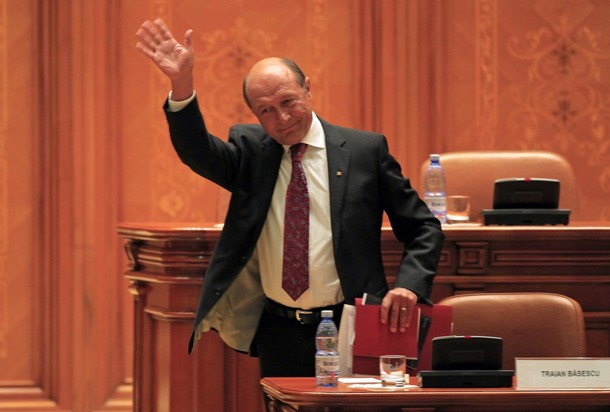 From Alison Mutler, the AP:  Romanian lawmakers impeached President Traian Basescu in an overwhelming vote Friday, paving the way for a national referendum that could see the divisive and increasingly unpopular leader ousted from the powerful position he’s held for eight years.

The vote of 256-114 in parliament came as Basescu and Prime Minister Victor Ponta have engaged in a bitter power struggle in the eastern European country of 19 million, which emerged from communism in 1989. The machinations, especially attempts to sideline the judiciary, have led the United States and the European Union to issue statements of concern about Romania’s democracy.

Basescu’s opponents accused him of overstepping his authority by meddling with the prime minister’s office and trying to influence judicial affairs. The 60-year-old former ship captain also was accused of making racist remarks about Gypsies and disabled people.

Senate Speaker Crin Antonescu, who will serve as interim president now that Basescu has been effectively suspended from the role, said a popular referendum on Basescu’s fate will be held July 29.

Basescu was impeached in 2007 but survived a referendum. Still, his popularity has declined steeply, and he faces tougher odds this time.

One major reason is that the Ponta-led government changed the law this week to make it easier to oust Basescu from office. Now, a simple majority of votes cast is needed to push him out. Before, a majority of all voters in Romania was required. . . .

Unlike presidencies in some European nations, Basescu’s position is not merely ceremonial. He is elected in a popular vote and is in charge of foreign policy, the powerful intelligence services and the country’s defense policies.  (photo: Reuters)