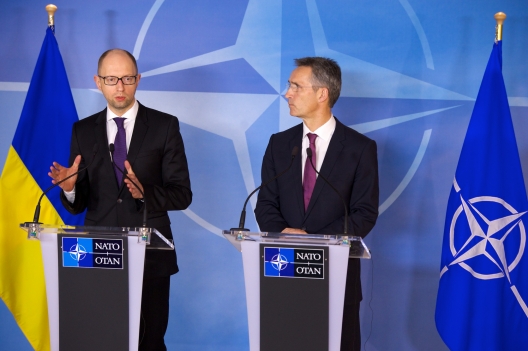 Ukraine’s prime minister on Monday called for more NATO support to reform its military as the country’s crisis with Russia has given new life to a once abandoned effort to eventually join the U.S.-led alliance.

“I do remember nine months ago when we said NATO membership is not yet on our radars,” Ukrainian Prime Minister Arseniy Yatsenyuk said during a news conference at NATO headquarters in Brussels. “I will tell you the screen of this radar has entirely changed.”

The presence of Russian tanks, howitzers and soldiers in eastern Ukraine, where pro-Russian separatists have been battling Ukrainian forces, has changed the security equation in the country, Yatsenyuk said. Russia has denied sending troops or weapons to the separatists.

However, Yatsenyuk acknowledged the path toward NATO membership — for which the alliance sets a series of benchmarks that can take years to implement — could be a long one.

“We need to pass reforms and implement reforms that are needed… to meet all standards and criteria that apply to all NATO states,” he said. “This is the roadmap and we will follow this roadmap.”

Any decision on further NATO expansion also requires unanimous support of all 28 members. In the past, Germany and several other countries have expressed opposition to accepting new members from the former Soviet Union, which Russia still regards as part of its sphere of influence.