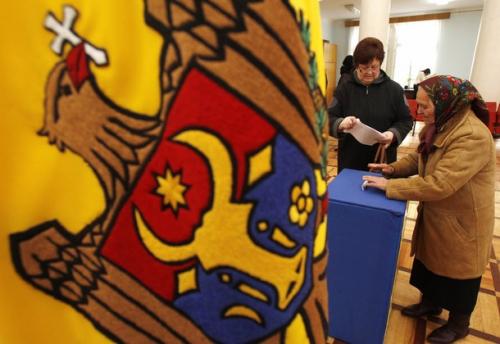 From the AP:  Moldova’s governing pro-Europe alliance was leading the opposition Communists, election results indicated Monday, but it appeared the coalition was just short of winning enough legislative seats to end the country’s year-long political deadlock.

With more than 99 percent of the votes counted from Sunday’s election, the three liberal parties of Prime Minister Vlad Filat‘s Alliance for European Integration led with 52 percent of the vote, against the Communists’ 39 percent. Final results are expected later Monday.

The current tally would give Filat’s alliance 59 seats, and the Communists 42. But 60 percent of the 101-seat legislature – a minimum of 61 votes – is needed to elect a president. …

Turnout was about 60 percent of the country’s 2.6 million eligible voters. …

The governing alliance is pursuing market and democratic reforms, and would like Moldova to become a member of the European Union, something it acknowledges would take years. It is supported in those efforts by Romania. Moldova was part of Romania until 1940, when it was annexed to the Soviet Union.

Moldova does not want to join NATO.  (photo: Reuters)