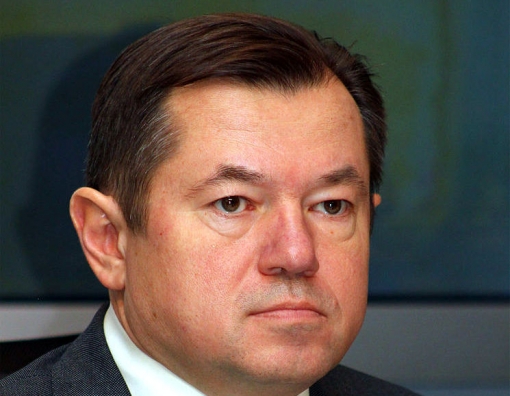 A senior Kremlin aide accused the United States on Thursday of arming Ukrainian “rebels” and, urging the Kiev government to put down what it called an attempted coup, warned it could intervene to maintain the security of its ex-Soviet neighbor.

Sergei Glazyev, an adviser to President Vladimir Putin with responsibility for relations with Ukraine, told a newspaper that U.S. “interference” breached the 1994 treaty under which Washington and Moscow jointly guaranteed Ukraine’s security and sovereignty after Kiev gave up its Soviet-era nuclear arsenal.

His characteristically confrontational comments, on the eve of an expected meeting between Putin and Ukrainian President Viktor Yanukovich at the opening of the Sochi Winter Olympics, could add to tensions with Washington, and within Ukraine.

Asked by Kommersant-Ukraine daily whether Russia might “actively intervene” if the country’s crisis deepened, Glazyev recalled the Budapest Memorandum of 1994: “Under the document, Russia and the USA are guarantors of the sovereignty and territorial integrity of Ukraine and … are obliged to intervene when conflict situations of this nature arise.

“And what the Americans are getting up to now, unilaterally and crudely interfering in Ukraine’s internal affairs, is a clear breach of that treaty. The agreement is for collective guarantees and collective action.”

He did not specify what action Russia might take. . . .

Glazyev, who was prominent in a Kremlin campaign last year that threatened economic sanctions against Ukraine if it took the EU deal, accused U.S. agents of giving “$20 million a week” for arms and other help to “the opposition and rebels” in Kiev.

“There is information that within the grounds of the American embassy, there is training for fighters, that they’re arming them,” Glazyev said. The U.S. embassy declined comment.