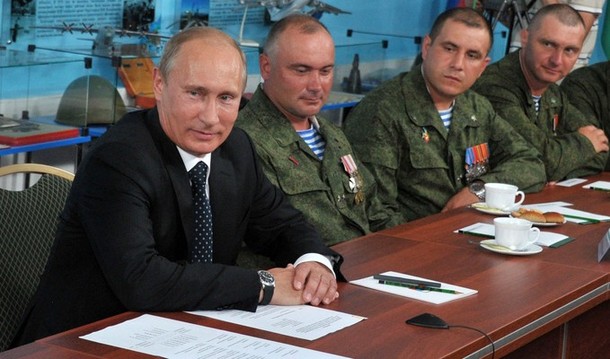 From RT:  With NATO-led coalition looking to exit the Central Asian hotspot in 2014, President Vladimir Putin said the international forces should stay in Afghanistan until their job is finished.

­"It is regrettable that many participants in this operation are thinking about how to pull out of there," Putin said at a meeting with paratroopers in the Russian city of Ulyanovsk. "They took up this burden and should carry it to the end."

The Russian leader’s comments suggest that NATO should remain in Afghanistan beyond the 2014 withdrawal deadline. . . .

NATO has permanent troops in Afghanistan at the moment, he noted. "We should help them. Let them keep fighting there. . . ."

Putin also noted that Russia and NATO are divided on many issues, but that NATO is "doing the right kind of job" in Afghanistan.

"So they are looking for work, for enemies,” he continued. “But in this specific case, they are doing the right kind of job, and we are helping them."  (photo: AP)