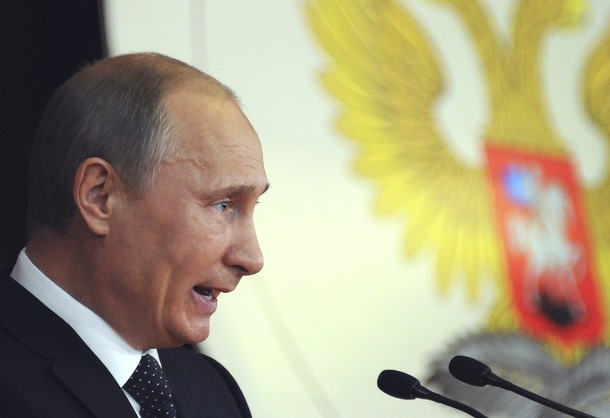 From Thomas Grove, Reuters:  President Vladimir Putin said on Monday the West’s influence was waning as its economy declines but warned Russian diplomats to be on their guard against a backlash from Moscow’s former Cold War enemies.

In a biennial speech to Russian ambassadors, Putin also took a shot at the West by condemning any unilateral actions to solve international disputes and underlined the importance of resolving such conflicts through the United Nations.

His remarks suggested that Russia, a veto-wielding permanent member of the Security Council, would keep on defending ally Syria at the United Nations over its military crackdown on an popular uprising that has evolved into an armed insurgency.

"Domestic socio-economic problems that have become worse in industrialized countries as a result of the (economic) crisis are weakening the dominant role of the so-called historical West," Putin told a meeting of Russian ambassadors from across the world. . . .

"Be ready for any development of the situation, even for the most unfavorable development," he said in the 20-minute speech, parts of which were televised.

Putin’s speech was sprinkled with the hawkish rhetoric that has made many foreign policy experts predict a turn for the worse in relations with the United States following his return to the Kremlin in May.

The economic problems faced by the European Union are the "tip of the iceberg of unresolved structural problems that is facing the entire world economy," he said.

Such comments, portraying Russia’s oil-fuelled economy as stable and in a much better state that the debt-ridden euro zone, are not only aimed at the West but also at protesters in Russia who say Putin’s return to the presidency will usher in economic and political stagnation.  (photo: Reuters)