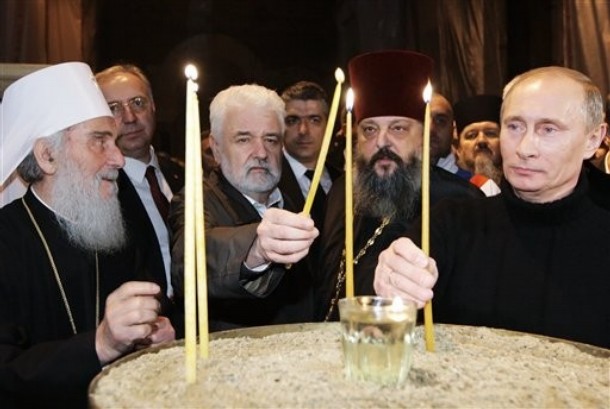 From Henry Meyer, Bloomberg:  In 1999, Russia was among the most vociferous critics of Western air attacks on a maligned dictator. Today, as Prime Minister Vladimir Putin visits the site of those bombings in Belgrade, little has changed.

Putin, who on March 21 condemned the air and missile strikes waged by the U.S. and its allies in Libya as a “crusade,” will meet Serbian President Boris Tadic on the eve of the 12th anniversary of the launch of an air bombing campaign in Yugoslavia by the North Atlantic Treaty Organization. …

The Russian prime minister warned yesterday that “the number of victims is growing” from the conflict in Libya. “Those who take part in this tragedy should think about it, they should think about it and pray for the salvation of their souls,” he said after talks with Slovenian Prime Minister Borut Pahor in Ljubljana.

Putin, whose rhetoric provoked a rare clash with President Dmitry Medvedev, was expressing his “personal point of view” about events in the North African state, Dmitry Peskov, the premier’s spokesman, told reporters yesterday in Ljubljana. The president “has the final say on foreign policy and no splits are possible,” Putin told reporters in the Slovenian capital.

From the AP:  Serb nationalists are demanded the government cancel plans to host a NATO conference later this year, as the country marks the 12th anniversary of the alliance’s bombing that ended the country’s rule in Kosovo.

Nationalist Democratic Party of Serbia says it will organize protests if the annual NATO event is held in Belgrade in June as planned.  (photo: AP)