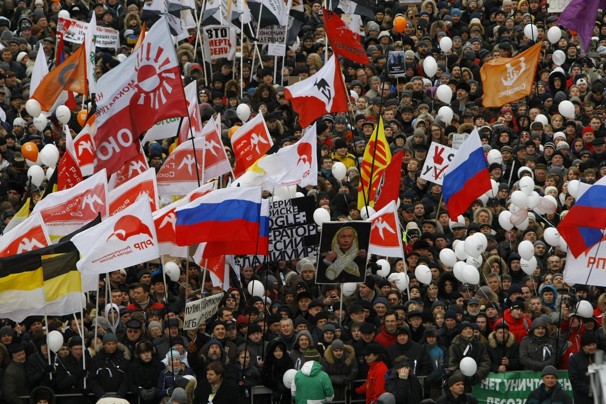 From Condoleezza Rice, the Washington Post:  Putin has staked his legitimacy on prosperity and order, but he seemed not to understand that a prosperous population would demand respect, too. In declaring that he would be president again and then engaging in election fraud during the December parliamentary voting, he insulted the Russian people. Many are fed up with a political system that sometimes behaves more like a natural resources syndicate than a national government.

It is not yet clear whether change will be revolutionary or evolutionary. If the powers that be read the lessons of the past year and make even modest reforms, they might give their people a great gift, one that knows no antecedent in Russian history: peaceful change. If they do not, conflict is inevitable. And Russia’s experience with revolution is not pretty.

Much depends on who capitalizes on the thirst for change. As daily protests wane, the hard work of political organizing must begin. In this regard, the liberal, or “right,” forces (as they are known) need to address the Russian people’s concrete economic and social concerns. Too often movements have rallied around a strong personality with minimal connection to the population’s aspirations. This time the liberals have a ready-made constituency in the rising middle class and its youthful vanguard. They cannot waste this opportunity.

Otherwise, the standard-bearers of change could be radical nationalists, even warmed-over communists who might well tap into the growing dissatisfaction but replace it with xenophobia and, ultimately, a rejection of democratic principles.

Do we have any influence in the outcome? Some, though not much. Certainly, we should speak even louder for respect for human rights and the rule of law. Undoubtedly, lower oil prices would rob the Kremlin of the easy money that fuels corruption, personal fortunes and authoritarianism. This is yet another compelling argument for developing North America’s significant sources of energy.

A Russia that fully develops its human capital, not just its resources in the ground, has the potential to make a real contribution to a more prosperous world. Medvedev once told me, “Russia has more excellent software engineers and mathematicians than any place in the world.” I held my tongue and didn’t answer, “Yes, but they are working in Palo Alto and Tel Aviv.” If they find work in Moscow and commit to its future, these Russians can make a difference. We can cultivate ties in the public and private sectors with these people. Diversification of the economy can also be assisted by Russian accession to the World Trade Organization, which should be supported.

For centuries Russia’s great-power status has largely rested on military might, natural resources, intimidation of its neighbors and suspicion of the outside world. U.S. foreign policy — “reset” or not — has not changed that reality because its foundation has been the character of Russia’s internal politics. How refreshing it would be if the Kremlin’s power were based on the creativity of its people — a not-so-farfetched idea for a nation that has produced extraordinary achievements in the arts and basic sciences throughout its troubled history.

A new generation of Russians has loudly voiced its insistence on respect from those who would govern — perhaps even demanding that they consent to be governed. We have a stake in their success and an obligation to help them achieve it.  (photo: Alexander Zemlianichenko/AP)