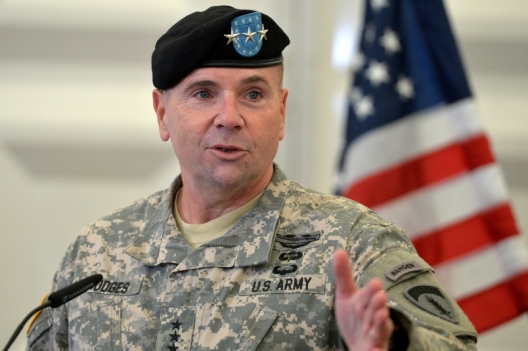 The commander of the US army in Europe has spoken out in support of the military relationship with Britain, amid concerns it could be damaged by defence cuts.

“The US-UK relationship is as important as ever,” Lt-Gen Frederick “Ben” Hodges said. “The UK is our oldest ally and still a leader in Nato. I think the UK will live up to its leadership position.”

He accused Vladimir Putin, the Russian president, of seeking to destroy Nato, and warned that Russia could seek to use the sort of “hybrid warfare” seen in eastern Ukraine against a Nato member to test the alliance.

“I am sure Putin wants to destroy our alliance, not by attacking it but by splintering it,” he said in a speech to military and political leaders in Berlin.

He warned that Mr Putin could try to destabilise a Nato member by using a rebel militia as in eastern Ukraine, or other forms of “ambiguous” warfare.

In the absence of an overt Russian attack, some Nato members could be reluctant to invoke Article 5 of the Washington treaty, under which an attack on one member is an attack on all.

“Once Article 5 is gone, our alliance is over,” Gen Hodges said….

Gen Hodges said he was “sure” the UK would continue to meet the 2 per cent target.

“The UK is one of only four Nato members that currently meets its 2 per cent target,” he said. “There are 24 that are already below, and many of them are well below.” He described German military equipment shortages as “unacceptable.”

“For the most powerful nation in Europe, which takes a leadership role in the EU, it is unacceptable to have helicopters that don’t fly, or aircraft you can’t use,” he said. Only 42 of Germany’s 109 Typhoon fighters are available because of maintenance issues, alongside 38 of its 89 Tornado bombers….

Gen Hodges accused Russia of having 12,000 troops inside eastern Ukraine.”If you don’t believe Russia is directly involved in Ukraine now, you’ll never believe it. You don’t want to believe it,” he said.

He accused Russia of seeking to establish control of the mouth of the river Danube, which would give it a stranglehold over the economies of south-eastern Europe.