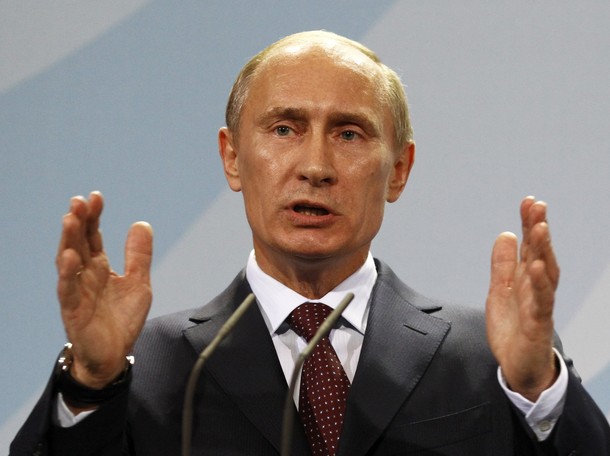 From Steve Gutterman, Reuters:  Prime Minister Vladimir Putin told CNN television that Russia would deploy nuclear weapons and "strike forces" if it were shut out of a Western missile shield, adding punch to a warning from President Dmitry Medvedev.

In an interview with Larry King taped on Tuesday, Putin also said the WikiLeaks scandal was "no catastrophe" and told the United States not to meddle with Russian elections.

Putin said missile threats against Europe must be tackled jointly — a reference to an agreement reached at a November 20 Russia-NATO summit to cooperate on missile defense. Plans are sketchy and Russia has warned it wants an equal role.

If Russia’s proposals are rejected and Western missile defense installations create "additional threats" near its borders, "Russia will have to ensure its own security," he said.

Russia would "put in place new strike forces … against the new threats which will have been created along our borders," he said, according to a translation in an excerpt on CNN’s website. "New missile, nuclear technologies will be put in place."

Putin said Russia was not threatening the West, but the remarks underscored the Kremlin’s insistence on maintaining a significant role in a missile defense system and suggested improving ties could sour again if agreement is not reached.

In his state of the nation address on Tuesday, Medvedev warned that a new arms race would erupt if U.S. and NATO offers of cooperation on missile defense failed to produce a concrete agreement within a decade.  (photo: Reuters)