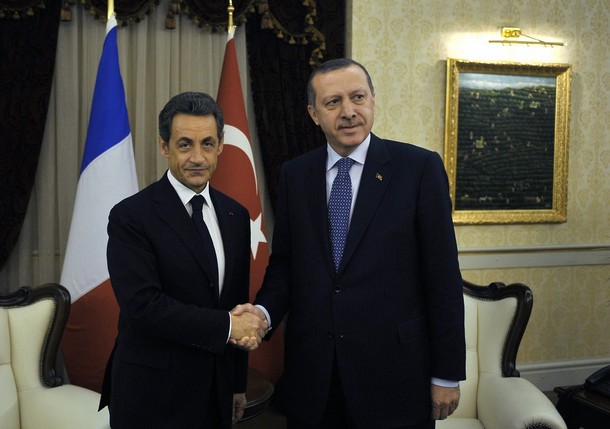 From Hurriyet:  Turkey’s opposition to transferring the command and control of an international intervention into Libya to NATO has put it in an awkward position with its allies and hampered ongoing NATO efforts to reach an agreement.

France, which helped lead the initial strikes on Libya, retaliated against Turkey’s move by vetoing a NATO role in humanitarian assistance and weapons blockade, something Ankara had sought.

“It’s not very likely that NATO will reach a consensus under these conditions,” a senior Turkish diplomat told the Hürriyet Daily News & Economic Review on Monday.
The Turkish and French permanent representatives to NATO, Haydar Berk and Philippe Errera, quarreled seriously during Sunday’s meeting over the role of the alliance in implementing the U.N. Security Council’s Resolution No. 1973, the Daily News has learned.
Following its failure to produce an agreement Sunday due to the disagreement between Turkey and France, NATO convened again Monday to review the situation in a meeting that was ongoing when the Daily News went to press.
A key contributing factor to Sunday’s rift was the French decision not to invite Turkey to a meeting on Libya where the details of the implementation of the Security Council resolution were discussed. Turkey’s anger was little soothed when French President Nicholas Sarkozy’s foreign policy advisor Jean-David Levitte called Turkish Foreign Ministry Undersecretary Feridun Sinirlioğlu to explain why Ankara was not invited to the meeting. …
“Prime Minister [Recep Tayyip] Erdoğan explicitly said he opposed foreign intervention. Therefore, we only invited like-minded countries,” a French diplomat told the Daily News.
In their phone conversation, Levitte assured Sinirlioğlu that Turkey’s participation in the coalition was most welcome if it would change its position, the paper has learned.
“If Turkey wants to participate in the coalition forces, it is more than welcome as we would be happy about an enlarged coalition,” said the French diplomat, who wished to remain anonymous. (photo: Reuters)
International Organizations Politics & Diplomacy United Nations