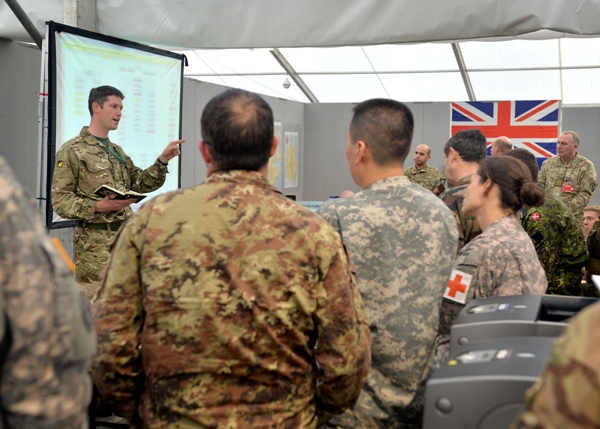 Close to 1000 personnel assigned to Headquarters Allied Rapid Reaction Corps (HQ ARRC) arrived at RAF St. Mawgan, Cornwall on Sunday to conduct a training exercise that will run through to Saturday 12 October 2013.

Exercise ARRCADE CHARGER is designed to ensure the Innsworth-based NATO headquarters continues to remain ready for any potential short-notice call-up it may receive as part of the NATO Response Force (NRF) this year. Additionally, FUSION will present an opportunity for the ARRC to test out a new NATO operational concept, that of the Integrated Land Command, or ILC. . . .

“As a NATO High Readiness Force, it is critical that we maintain our edge,” continued Powell. “Both CHARGER and FUSION provide an excellent opportunity for us to test our operating practices and capabilities and ensure that we will be able to effectively command those troops assigned to us on any potential NATO operation.”

Occurring during the last two weeks of November, FUSION will see four divisions and three separate brigade headquarters, from across Europe and North America, join the Headquarters in Cornwall for a two-week exercise. Also participating in this exercise will be units and troops from ARRC Partner Nations, Denmark, Canada, Italy, the United States and Portugal, as well as personnel from Qatar, the United Arab Emirates, Australia, and New Zealand – all-in-all totalling some 2000 military and civilian personnel.

HQ ARRC is currently on stand-by for short-notice call-up and subsequent rapid deployment (5 days notice to move) in support of any potential NATO Response Force (NRF) mission that may develop during 2013.