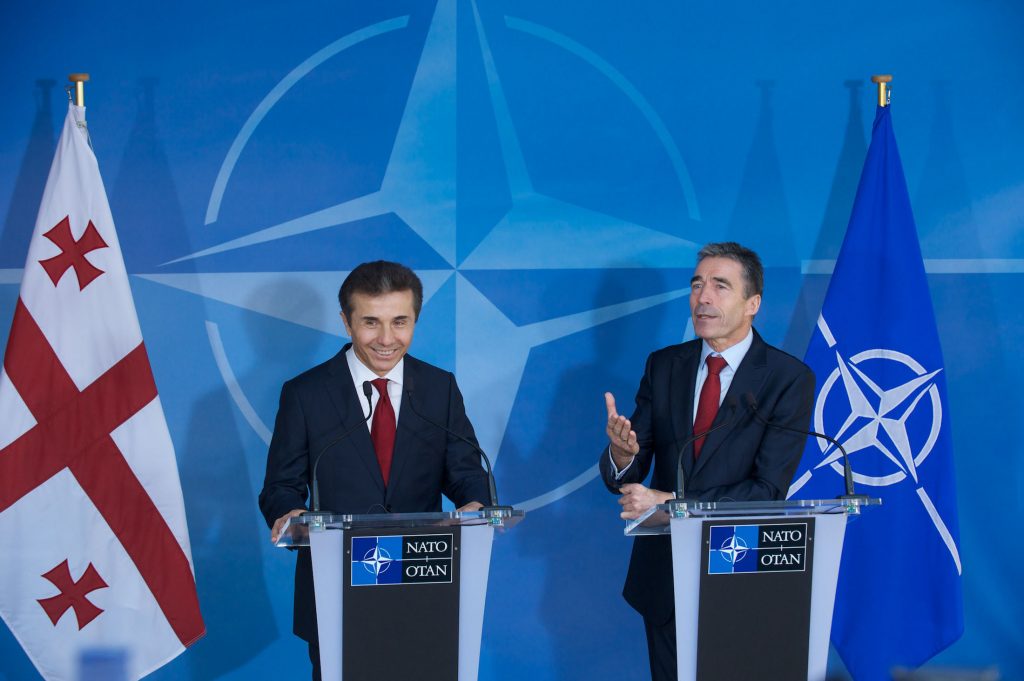 Anders Fogh Rasmussen (NATO Secretary General):  Georgia is a close and committed partner for NATO. You recently doubled your contribution to our mission in Afghanistan. You have already joined the planning process for the NATO-led mission to train, advise and assist the Afghan forces after 2014. You aspire to join our Alliance. And Prime Minister, I welcome your confirmation that your government is committed to that aspiration. . . .

As I told President Saakashvili on Monday, I strongly urge both of you, Prime Minister, to cooperate and make co-habitation work, in full respect for the constitution, in the months to come. This is vital for the Georgian people, and for Georgia’s future.

As we made clear at the NATO Summit in Bucharest in 2008 and in subsequent Summits, Georgia will become a member of NATO. We are committed to your Euro-Atlantic future and to Georgia’s territorial integrity and sovereignty.

But Membership will take more work, and more reforms. And it will take constructive cooperation between all branches of government. So I encourage all parties in Georgia to keep consensus on Georgia’s Euro-Atlantic policies and work together to pursue the necessary reforms and meet the highest democratic standards. And I am confident that Georgia’s democracy will pass that test. . . .

Georgian Public Broadcaster:  [D]o you think that this situation, the cohabitation, is going well? Today you met Mr. Prime Minister, what would be your first assessment in this regard?

Anders Fogh Rasmussen (NATO Secretary General):  Indeed, I raised this issue with the Prime Minister and I made my position clear. I am concerned if these trials are perceived to be politically motivated that would be damaging for the image of the country and the government. Even if it’s not true. That’s my concern. This is the reason why it is of utmost importance to stress that such trials must take place in accordance with the basic principles of rule of law, ensure full transparency, ensure due process. That’s what I have made clear.

The Prime Minister has assured me that will be the case. And based on that, I also have to say, and really stress, we’re not going to interfere with ongoing trials. We have confidence that they will be conducted without political interference and live up to the fundamental principles of rule of law.

Bidzina Ivanishvili (Prime Minister of Georgia): So, if you would, yes, we really discussed this issue and the concern which was expressed by Mr. Secretary General. It should not be the political persecution, and of course, we also have the same sense. And what he regrets we also regret for this development because the new government had to pursue these kind of detentions.

We would like to assure, once again, the Secretary General and the wider society that it was not the reason, the political persecution. Of course, we know that people try to put the shade of political persecution. You know that the old government tries to do it to make it as a political order. But it’s their attempt, it’s their problem. It will not be so easy to prove it, because all the trials will be very transparent and absolutely accessible to everybody.

Please, the journalists, don’t try to find any discrepancies between our positions. We both, the Secretary General and I, we really have one and the same position. We have not conducted any political persecution. Neither inside of Georgia, nor outside of it. We don’t want anybody to think that we do something like that.

I promised already, and I again say, there will not be any selective justice in Georgia, but we will administer the justice.  Whoever breaches the law, they will be punished.  (photo: NATO)