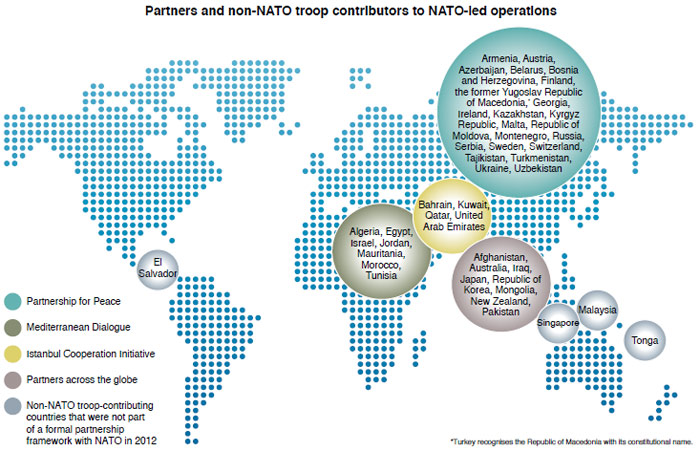 From Anders Fogh Rasmussen, NATO:  At a time of complex and unpredictable global risks and threats, delivering security must be a cooperative effort. NATO continues to strengthen its connections with other countries and organisations around the globe, reflecting the commitment to cooperative security outlined in the 2010 Strategic Concept.

In 2012, the Alliance has sought to broaden its partnerships and reinforce existing ones which could make a concrete contribution to the success of the Alliance’s fundamental tasks.

A broader range of partners

Over the past two decades, NATO has developed a network of structured partnerships with countries across the Euro-Atlantic area, the Mediterranean and the Gulf region, as well as with other international organisations. Building on these formal partnerships, it has reached out to other partners across the globe, with which it engages in individual relationships.

Many NATO partners have made particular political, operational and financial contributions to NATO-led operations. In recognition of that, at the Chicago Summit in May 2012, NATO Allies held a meeting with the leaders of a group of 13 partner countries – Australia, Austria, Finland, Georgia, Japan, Jordan, the Republic of Korea, Morocco, New Zealand, Qatar, Sweden, Switzerland and the United Arab Emirates.

In June, NATO and Australia signed a joint political declaration reflecting their ever-stronger ties and their determination to deepen cooperation to meet common threats. This bilateral agreement is soon to be complemented by an Individual Partnership Cooperation Programme covering existing cooperation and outlining priority areas for future cooperation. Iraq, Mongolia, New Zealand and the Republic of Korea also engaged in Individual Partnership Cooperation Programmes with NATO for the first time in 2012. . . .

Cooperation between NATO and Russia continues to be of strategic importance, as NATO and Russia share common security interests and face common challenges. Cooperation on Afghanistan has deepened, with an expansion of Russia’s support for NATO transit requirements for the ISAF mission, training of counternarcotics officials and maintenance of Afghan army helicopters. In the field of cooperative airspace, NATO Allies and Russia have developed an initiative which allows neighbouring countries to monitor civil aircraft suspected of being hijacked by terrorists. This system reached its operational capability in December 2011. A simulated exercise called “Vigilant Skies 2012” took place on 13-14 November 2012 to test procedures and capabilities.

The Alliance’s other formal partnerships also progressed in 2012. NATO is working towards agreeing a new political framework for the Mediterranean Dialogue to reinforce the existing relationship between the NATO Allies and the seven partner countries which participate in this initiative. Kuwait generously agreed to host an Istanbul Cooperation Initiative Centre, which will help NATO deepen relations with all of its Gulf partners.

Relations with international organisations are developing at a steady pace. NATO and the United Nations enhanced high-level contacts in 2012. NATO and European Union personnel serve side by side in Kosovo, Bosnia and Herzegovina and Afghanistan. Regular staff-level contacts are held to exchange information and avoid duplication, particularly in the area of capability development. NATO also maintains regular contacts with the Organization for Security and Co-operation in Europe and has continued to explore the possibilities for further cooperation with the African Union and other regional organisations.

One of NATO’s most important partnership achievements has been to develop the expertise for NATO and partner militaries to be able to work together and implement complex joint operations. Allies remain committed to giving operational partners a structural role in shaping strategy and decisions, from the planning through to the execution phase, of current and future NATO-led operations to which they contribute. This has been the case for the 50-nation ISAF mission and the Libya operation. It is now also taking place for the planning of the post-2014 NATO-led mission in Afghanistan, where countries that have declared their willingness to commit to a concrete and substantial contribution are already part of the planning. . . .

At the Chicago Summit, NATO met with the four partners that aspire to NATO membership – Bosnia and Herzegovina, Georgia, Montenegro and the former Yugoslav Republic of Macedonia – and reiterated its commitment to taking in new members. NATO will continue work with all four to pursue the reforms necessary to meet Alliance standards.