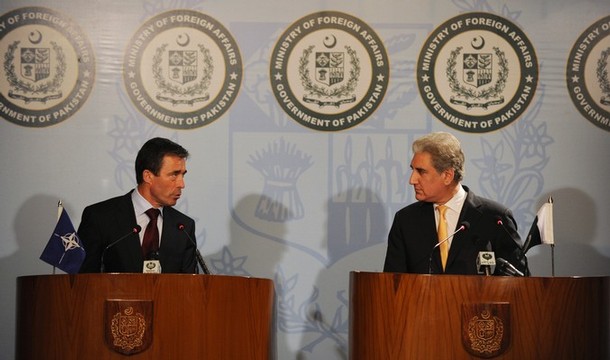 From AFP:  NATO chief Anders Fogh Rasmussen said Wednesday he sought broader, deeper ties with Pakistan, in a visit to Islamabad that followed a major international conference in neighbouring Afghanistan.

Rasmussen reiterated a NATO commitment to stay in Afghanistan beyond the planned end of combat operations in 2014, and said he understood Pakistan’s vital role in achieving security in the region.

"I strongly appreciate NATO’s developing relations with Pakistan and it is my strong desire to deepen it politically as well as militarily," he said at a press conference held with Pakistan’s foreign minister Shah Mehmood Qureshi. …

"This partnership is not confined to needs in Afghanistan," Foreign Minister Qureshi told Wednesday’s press conference.

"This is a very important relationship and we intend to build on it…. We have both been useful partners to each other and this partnership will continue in the days to come," he said.

During Pakistani Prime Minister Yousuf Raza Gilani‘s visit to Brussels in June, NATO and Pakistan agreed to strengthen their political ties with measures that could include high level exchanges and parliamentary visits.  (photo: Getty)