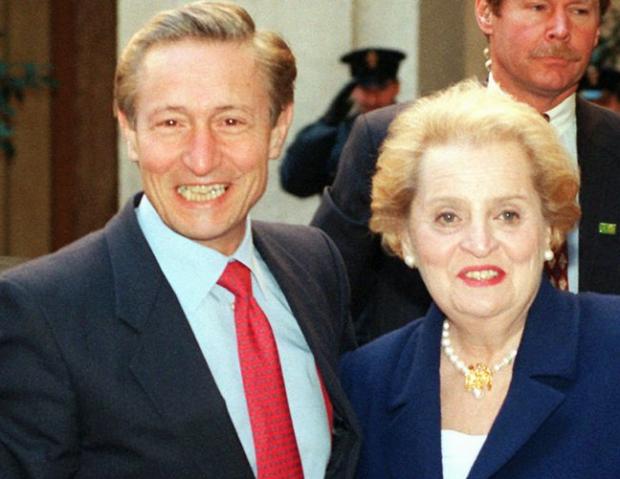 From Emily Langer, the Washington Post:  Reginald Bartholomew, an unflappable U.S. diplomat who was entrusted with assignments in global danger zones and survived a bombing while serving as ambassador to Lebanon during that country’s long civil war, died Aug. 26 at a hospital in New York City.

Mr. Bartholomew’s most visible public role came as ambassador to Lebanon from 1983 to 1986. He arrived in the country one day before the truck bombing on Oct. 23, 1983, that killed 241 people at a Marine barracks in Beirut.

Less than a year later, Mr. Bartholomew was wounded in a bombing of the U.S. Embassy in East Beirut that killed more than a dozen people. He had to be pulled from the rubble. . . .

Mr. Bartholomew left Beirut in 1986 and began a three-year stint as ambassador to Spain. He later served as undersecretary of state for arms control and international security affairs and as U.S. permanent representative on the NATO council. . . .

After completing a four-year ambassadorship in Italy in 1997, Mr. Bartholomew remained in the country for a number of years as a top executive with the international offices of Merrill Lynch. He retired in 2011. . . .

Mr. Bartholomew began his government work in the late 1960s at the Defense Department, where he became known as a top authority on European security issues.

He moved to the State Department in 1974 and rose through the ranks, including an assignment on the National Security Council. He later was assistant secretary of state for political-military affairs, a top position in the State Department. During his years in Washington, he lived in the Hollin Hills neighborhood of Alexandria and in Georgetown.

From William Yardley, the New York Times:  Reginald Bartholomew was born Feb. 17, 1936, in Portland, Me. His father, Thomas (whose original family name was di Bartolomeo), and his mother, the former Corinne di Crecchio, both immigrated from Italy.

Mr. Bartholomew was 20 and still a student at Dartmouth when he married Rose-Anne Dognin, who had moved to the United States from France and was a few years older. “It was a grand, grand, grand ride, 56 years, and every bit of it has been exciting,” Mrs. Bartholomew said in an interview Wednesday.

Besides his wife, Mr. Bartholomew is survived by a brother, David; a daughter, Sylvie Bartholomew; three sons, Christian, Damien and Jonathan; and seven grandchildren.

Mrs. Bartholomew said her husband knew he wanted to work overseas and passed the Foreign Service exam as a sophomore in college. After graduating from Dartmouth in 1958 with bachelor’s degrees in history and political science, he went to graduate school at the University of Chicago. He received his master’s in political science, did work toward his doctorate and taught at the university, in addition to spending a year in France studying French politics.

UPDATE:  From Italy’s Ministry of Foreign Affairs:  Minister for Foreign Affairs Giulio Terzi sent his condolences to the family of Reginald Bartholomew in which he expressed his “deep esteem and sincere affection” for the American diplomat who passed away yesterday, the news of which Minister Terzi received “with deep sorrow”.

“Bartholomew”, Terzi wrote, “was in the forefront of American diplomacy and a great friend to Italy, where he served as Ambassador from 1993 to 1997. He left an indelible impression on me personally and on all those who had the privilege of working with him”.