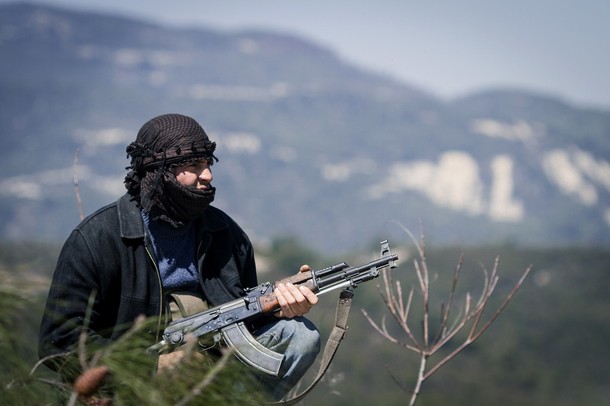 From Martin Chulov, Ewen MacAskill, and John Densky, the Guardian:  Saudi officials are preparing to pay the salaries of the Free Syria Army as a means of encouraging mass defections from the military and increasing pressure on the Assad regime, the Guardian has learned.

The move, which has been discussed between Riyadh and senior officials in the US and Arab world, is believed to be gaining momentum as a recent flush of weapons sent to rebel forces by Saudi Arabia and Qatar starts to make an impact on battlefields in Syria.

Officials in the Saudi capital embraced the idea when it was put to them by Arab officials in May, according to sources in three Arab states, around the same time that weapons started to flow across the southern Turkish border into the hands of Free Syria Army leaders.

Turkey has also allowed the establishment of a command centre in Istanbul which is co-ordinating supply lines in consultation with FSA leaders inside Syria. The centre is believed to be staffed by up to 22 people, most of them Syrian nationals.

The Guardian witnessed the transfer of weapons in early June near the Turkish frontier. Five men dressed in the style of Gulf Arabs arrived in a police station in the border village of Altima in Syria and finalised a transfer from the Turkish town of Reyhanli of around 50 boxes of rifles and ammunition, as well as a large shipment of medicines.

The men were treated with deference by local FSA leaders and were carrying large bundles of cash. They also received two prisoners held by rebels, who were allegedly members of the pro-regime militia, the Shabiha.

The influx of weapons has reinvigorated the insurrection in northern Syria, which less than six weeks ago was on the verge of being crushed.

The move to pay the guerrilla forces’ salaries is seen as a chance to capitalise on the sense of renewed confidence, as well as provide a strong incentive for soldiers and officers to defect. The value of the Syrian pound has fallen sharply in value since the anti-regime revolt started 16 months ago, leading to a dramatic fall in purchasing power. . . .

Diplomatic sources have told the Guardian two US intelligence officers were in Syria’s third city of Homs between December and early February, trying to establish command and control within rebel ranks.

Interviews with officials in three states reveal the influx of weapons – which includes kalashnikovs, rocket propelled grenades and anti-tank missiles – started in mid-May, when Saudi Arabia and Qatar finally moved on pledges they had made in February and March to arm rebel forces.

The officials, who insisted on anonymity, said the final agreement to move weapons from storage points inside Turkey into rebel hands was hard won, with Ankara first insisting on diplomatic cover from the Arab states and the US.

Turkey is understood to view the weapons supply lines as integral to the protection of its southern border, which is coming under increasing pressure as regime forces edge closer in an attempt to stop the gun-running and attack FSA units.  (photo: Getty)