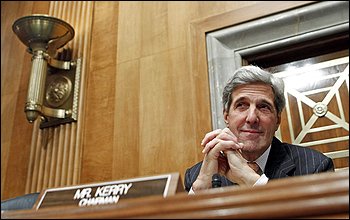 From Walter Pincus and Mary Beth Sheridan, the Washington Post:  The United States believes Russia is not fully complying with international pacts involving chemical and biological weapons, although Moscow has settled most questions about violations of a nuclear arms treaty with the United States, according to a State Department report to be made public Wednesday.

The State Department Compliance Report had been requested earlier this month by seven of the eight Republicans on the Senate Foreign Relations Committee. They were concerned because the last report in 2005 highlighted what they described as "direct violations of START I by the Russians, " a reference to the Strategic Arms Reduction Treaty signed in 1991.

The report comes at a crucial time, as the Senate considers a new treaty that would replace START I. The Obama administration hopes to have it ratified by year’s end, when Democrats will likely lose some of their Senate seats. The Foreign Relations Committee could vote on the treaty as early as next week.

But key Republicans are establishing tough conditions for approval — including ironclad commitments from the White House to dramatically increase spending on the maintenance of the nuclear-weapons complex. President Obama has tried to address those concerns by laying out a plan to spend $80 billion on the nuclear weapons complex over the next decade.

The new compliance report, obtained by the Washington Post, says that several issues raised in the 2005 version have been resolved, on subjects such as the movement of Russian road-mobile missiles and inspection of reentry vehicles. But the report may nonetheless fuel the debate over the new treaty, because it says a number of other compliance issues remained unresolved when the treaty expired last December. The unclassified version of the report does not identify them. (photo: Haraz N. Ghanbari/AP)