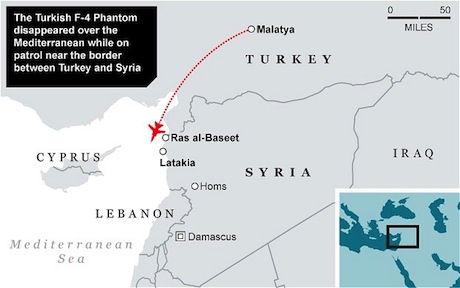 From Michael Weiss, the Telegraph:  According to a US  government source privy to the Nato meeting called by Turkey on Tuesday, Ankara has requested that the alliance draw up contingency plans for a no-fly zone to protect Turkish territory in the event of further acts of Syrian aggression. Turkey invoked Article IV of the Nato charter, which calls on the alliance to “consult” together whenever one of them deems that the “territorial integrity, political independence or security” of any member is threatened, after Syrian air defence systems shot down a Turkish F-14 (sic) Phantom jet that was conducting a training exercise. The Turks say that the plane dipped briefly into Syrian air space but was targeted and destroyed 13 nautical miles from the Syrian coast, in international air space. A rescue plane dispatched to search for the pilots was also apparently fired upon.

“The Turks purposefully left it vague and didn’t provide many specifics,” the source said. “But they also didn’t give [Nato] members a heads-up before the meeting that they’d be asking for this and everyone was surprised.”

All members have now taken Turkey’s request back to their capitals. The alliance is meant to reconvene in the coming days.

While not a green light for war, this request is more evidence of Turkish escalation in the wake of the F-14 (sic) incident.

Michael Weiss is the Communications Director of The Henry Jackson Society, a foreign policy think tank, as well as the co-chair of its Russia Studies Centre. A native New Yorker, he has written widely on English and Russian literature, American culture, Soviet history and the Middle East. Follow @michaeldweiss.  (graphic:  Telegraph)