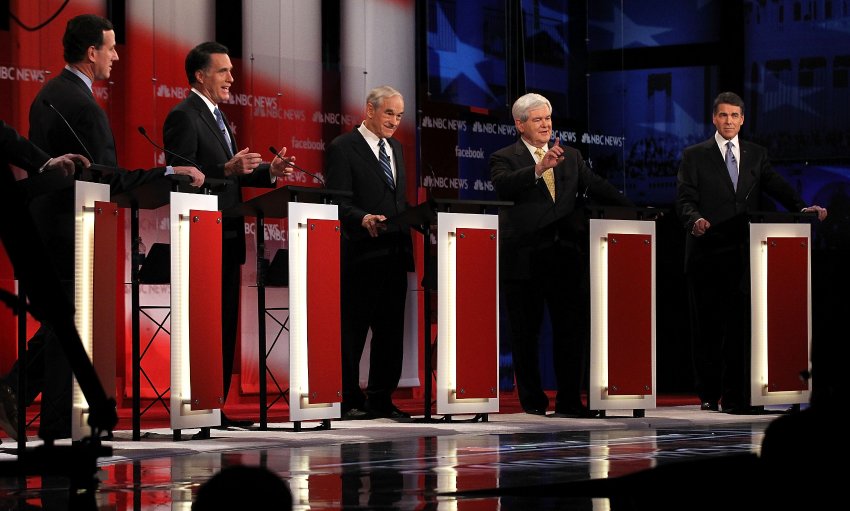 From Sebastian Fischer, Spiegel:  Europe is socialist, bloated and a threat to the global economy. That appears to be the message from the ongoing presidential campaign in the US. Republicans in particular have discovered Europe as a convenient punching bag — and have even begun accusing each other of being too "European."

A specter is haunting the United States. That, at least, is what the Republicans seem to believe in this election season. And the specter has a name: Europe.

US President Barack Obama, said leading Republican candidate Mitt Romney during the Republican debate on Saturday, wants to turn the US into a "European welfare state." At a weekend appearance in New Hampshire, site of a crucial primary vote on Tuesday, Romney said "I don’t believe in Europe. I believe in America."

In an election year overshadowed by the threats posed by the European economy and concerns about the break-up of the European common currency, it is a message that Romney has been delivering every chance he gets. And he’s not alone. Europe-bashing has become an important stump-speech cornerstone for the entire Republican field. The message, as Romney never tires of delivering it, is clear: "I don’t think Europe is working in Europe. I know it won’t work here. . . ."

[W]ith Europe deep in crisis, the Continent has become an even more prominent element of Republicans’ stump speeches. With high state debt, high unemployment in several countries and a sluggish euro-zone economy, the European Union is seen as a club of losers.

"You want to see America after the Obama administration is through," arch-conservative candidate Rick Santorum said on the campaign trail last week, "just read up on Greece." Santorum is fond of the sentence, and often replaces that country depending on the relative economic situation in Europe. Portugal likewise gets mentioned frequently, as do Italy and Ireland. Lately, France too has been making an appearance.

The US president, in other words, is merely a European in disguise. That is the message the Republicans would like to convey. Newt Gingrich, in particular, never tires of calling Obama a "socialist." Obama has a "European social democratic vision" says Romney, and claimed recently that per capita income in the US was "50 percent more" than in Europe. And Ron Paul, perhaps the most extreme of the Republican field full of extremists, advocates pulling US troops out of Europe, in part so that America is no longer in the position of subsidizing "socialist Germany."

Such attacks would, of course, be ridiculous were they not so effective at a time when the economic outlook in the US is far from rosy, particularly given the danger that the euro-zone debt crisis could put a quick stop to America’s fragile economic recovery.   (photo: AFP)