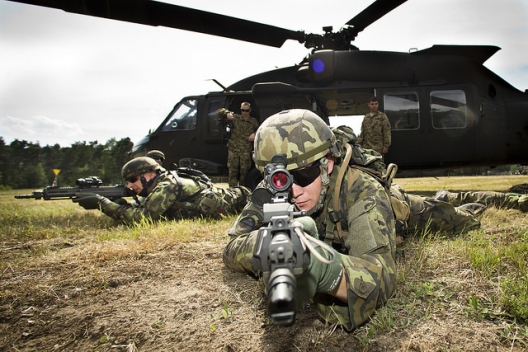 Russia is currently riding high on the geostrategic landscape, despite a trove of domestic economic woes that stem partly from Western sanctions. But Vladimir Putin has successfully wagged the dog and distracted Russians from this by illegally annexing Crimea by force, occupying eastern Ukraine with a proxy force upheld by Russia, and successfully keeping the Assad regime in force with a surprise intervention. Putin’s intervention In Syria has not only sent cruise missiles through an airspace with U.S. aircraft in it, but also wiped out the efforts by Western intelligence services on the ground to aid the anti-regime rebel forces.

Russia continues to be undeterred in its use of force, which was reinforced recently by a Russian fighter plane buzzing a U.S. reconnaissance aircraft within 50 feet and multiple Russian fighters buzzing a U.S. destroyer ship within 30 feet, both in the Baltic Sea. Russia is in fact so sufficiently undeterred at present that the Baltic members of NATO are once again in fear of direct Russian intervention. All of this comes as NATO members are preparing to hold a crucial summit in Warsaw—perhaps the most pivotal Alliance summit since the end of the Cold War.

Its number one task is straight forward: restoring conventional deterrence in Europe. NATO’s previous summit in Wales was supposed to accomplish this task, but it fell short in its attempt at providing sufficient reassurance to the East Central European members of the Alliance. NATO suspended its relationship with Russia, warned it, and through a series of small-scale maneuvers and exercises sought not only to reassure threatened members but also restore conventional deterrence with regard to Russian threats. It failed. This became clear even before NATO officials had departed from Wales, as Russian intelligence operatives kidnapped an Estonian intelligence operative in a successful attempt by Russia to thumb its nose at NATO.

NATO must compensate for this by beginning to restore deterrence and increase contributions from NATO members to the Alliance’s collective defense. Otherwise it risks a consequential slide into a two-tier alliance and a collection of allies that even in the face of a dramatic newfound series of threats from Russia cannot manage to climb out of the joint security trap they fell into over the past five years.

The U.S. and Europe could have avoided their joint security trap, akin to a prisoner’s dilemma wherein two security partners fail to coordinate their next moves and thus both end up worse off—i.e. less secure. The joint security trap has occurred by way of the U.S. and its European allies engaging in a series of sharp defense spending and capabilities cuts that were uncoordinated and very costly to the Alliance’s readiness and deterrence. Had they coordinated what to cut and where to cut, they could have not only reduced defense spending, but actually maintained readiness and even improved capabilities. By falling into the joint security trap, Western allies also sacrificed conventional deterrence in Europe.

Unless allies use this opportunity to restore deterrence in Europe—effectively raising the cost of Russian aggression—the next 12 months could prove highly dangerous as Russia continues to try to intimidate the U.S. and others in a highly provocative fashion, including the ongoing weaponization of refugees and the further destabilization of Europe. Belatedly, the U.S. has begun to recommit itself more fully to European security, through not one but two European Reassurance Initiatives (ERI I and ERI II) that commit the U.S. to the forward placement of military equipment at allied bases closer to Russia and rotating troops in the region.

However, the Obama Administration has announced both of these unilaterally—the first at $750M and the second at $3.4B—without extracting commitments for spending increases from European allies and placements of their own troops further east. This was a mistake, as it is a considerable strategic challenge for the U.S. to induce its allies to share the burden of security provision more equitably. Re-extending the security blanket to Europe needs to be dangled as it were, not committed to in lieu of additional European commitments. Worse still, Russia’s reckless challenges to allied ships and aircraft and its aggressive actions in Syria in particular have rendered the intended deterrent effect of ERI all but stillborn.

To a degree, our European allies are playing with fire. Already numerous Administration officials and key members of Congress are souring on unfurling the security blanket all over again—not to mention the Presidential campaign’s most unconventional extent candidates. Collectively they are beginning to wonder how many countries Russia needs to invade for our European allies to get their collective act together—Moldova, Libya, central Ukraine? Yet, there is room for guarded optimism. ISIS is actually helping to turn the free-riding of key allies around. France, Britain, Germany, and Italy have not only begun to spend more, but they have also increased their commitments to the air campaign against ISIS as well as the training and advising of Iraqi and Kurdish forces; moreover, France handled the Mali operation.

This bodes well for the outcome of Warsaw and offers the U.S. something to work with diplomatically despite the non-inducing ERIs. NATO needs to do more than it is at present. The under-funded Readiness Action Plan and Very High Readiness Joint Task Force, tripling of the NATO Response Force, and multinational brigade are necessary but insufficient. These need to be augmented with permanent forward placement of multiple multinational brigades and the requisite equipment. The Alliance furthermore needs to accent permanent placement with additional and more high profile Russia-focused exercises—like using the Anaconda Exercise in June to simulate repelling a Russian incursion—and a la the idea of Jorge Benitez, developing a NATO training center in Lithuania that does far more than a typical training center, including increasing resilience and dealing with Russia’s hybrid operations. NATO should also work more closely with the EU and help ensure the coming EU Security Strategy does what it needs to do.

Whereas the Wales Summit failed to deal sufficiently with external threats to the Alliance, Warsaw represents a chance to get it right. Aside from defeating ISIS, there is no greater security imperative for Western allies than fully restoring conventional deterrence in Europe, climbing out of the joint security trap for good, and raising the cost of Russian aggression. The world is getting precariously closer to an actual new Cold War, but Warsaw can and should begin to tip the balance in the other direction.

Dr. Jeffrey A. Stacey is a national security consultant based in Washington, D.C. Stacey was a State Department official in the Obama Administration, and is author of “Integrating Europe” by Oxford University Press.