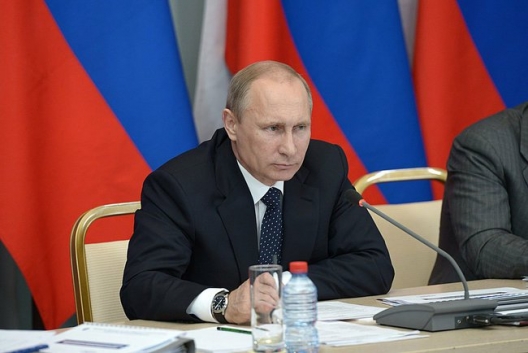 As the European Union considers further sanctions on Russia for its role in the standoff in Ukraine, Russia is broadly unpopular in many countries around the globe and increasingly disliked in Europe and the United States. . . .

These are among the key findings of a survey by the Pew Research Center conducted from March 17 to June 5, 2014 among 48,643 respondents in 44 countries, including Russia. . . .

Across the 44 countries surveyed, a median percentage of 43% have unfavorable opinions of Russia, compared with 34% who are positive.

Negative ratings of Russia have increased significantly since 2013 in 20 of the 36 countries surveyed in both years, decreased in six and stayed relatively similar in the remaining 10.

Americans and Europeans in particular have soured on Russia over the past 12 months. More than six-in-ten in Poland, Germany, Italy, Spain, France, the U.S. and the UK have an unfavorable image of Russia. And in all but one of these countries negative reviews are up by double digits since last year, including by 29 percentage points in the U.S., 27 points in Poland, 24 points in the UK and 23 points in Spain. Greeks stand out among their European counterparts – just 35% dislike Russia, virtually unchanged from last year.

Ukrainians’ attitudes toward Russia also have changed significantly over time. Six-in-ten in Ukraine rate Russia unfavorably today, compared with just 11% in 2011, the last time the question was asked. Within Ukraine, there are deep divides by region and language. More than eight-in-ten in the country’s west (83%) give Russia low marks, compared with 45% in the east and only 4% in Crimea. Within the east, Russian-only speakers (28%) are less negative toward Russia than their neighbors (58%).

As has been the case in previous years, Russia is also unpopular with publics in the Middle East. More than half in most countries surveyed in the region have an unfavorable opinion of Russia, including seven-in-ten or more Jordanians, Turks and Egyptians. The Palestinians and Tunisians are less negative. In Lebanon, attitudes vary significantly by religious group. Majorities of Sunni Muslims (80%) and Christians (63%) give Russia unfavorable ratings, compared with just 12% of Shia Muslims.

Russia is increasingly disliked in many Latin American countries, though the change has not been as dramatic as in the U.S. and Europe. And while, on balance, most publics hold negative views of Russia, substantial percentages have no opinion. More than four-in-ten in Brazil, Venezuela, Chile and Mexico give Russia unfavorable ratings. Significant increases in Russia’s unpopularity since last year occurred in Venezuela, Argentina, Brazil, Chile, El Salvador and Mexico.

In Asia, there are deep divisions between nations over their opinions of Russia. Roughly seven-in-ten in Japan (69%) rate Russia unfavorably compared with a quarter or fewer in China (23%) and Vietnam (14%). China is one of the few countries where negative reviews have declined substantially in the past year (-16 percentage points).

African nations remain the least likely among the regions surveyed to rate Russia unfavorably. In fact, pluralities in most countries, with South Africa being the major exception, give Russia high marks, though many people do not express an opinion either way.