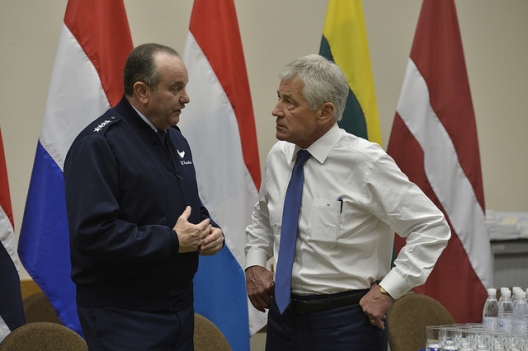 Britain and its Nato allies will be asked to transform a military base in eastern Europe to help the alliance respond faster to any threat posed by Russia.

The shift in posture is being proposed by General Philip Breedlove, Nato’s top commander in Europe. He plans to recommend placing supplies — weapons, ammunition and ration packs — at the headquarters to enable a sudden influx of thousands of Nato troops to be ready for action in the event of a crisis.

A number of Nato bases are being considered for the role but the leading contender is Multinational Corps Northeast, in Szczecin, Poland.

General Breedlove “wants to use an existing headquarters in the Nato structure and focus them fully on the Article 5 mission“, an alliance source said, referring to one of the founding principles of Nato — that an attack on one is an attack on all.

“It would be a 24/7 fully functioning headquarters that forces could quickly fall in on to respond rapidly when needed,” the source said. . . .

The general told a briefing in Naples this week that Nato needed “pre-positioned supplies, pre-positioned capabilities and a basing area ready to rapidly accept follow-on forces. . . .”

“The Russians have decided that they are willing to use force to achieve their aims . . . and that breaks with 25 years of building a security structure in Europe built around certain fundamentals,” a Nato official said.