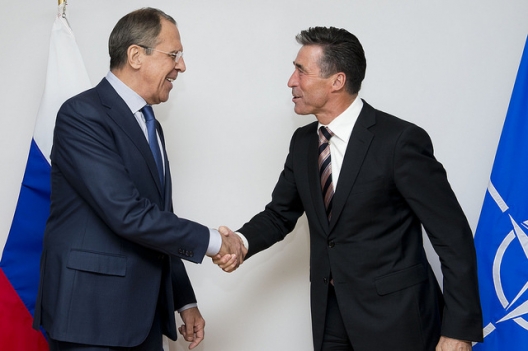 Russia and NATO are drawing up plans for a rare joint naval operation in the Mediterranean to protect the U.S. ship that will destroy Syria’s deadliest chemical weapons, officials and other sources said.

The operation would be a symbolic breakthrough at a time when NATO-Russian relations are strained over NATO’s anti-missile shield and East-West tensions are running high over Ukraine.

It would also signal strong global backing for the U.S.-Russian agreement last August to destroy Syria’s chemical weapons stockpile, a deal that averted the threat of U.S. military strikes on Syria.

Under the plan being discussed, NATO and Russian warships would share the task of protecting the Cape Ray, a U.S. cargo ship that will process at sea about 500 tonnes of chemicals that are too dangerous to deal with on land.

NATO and Russia are still trying to iron out some technical hitches, but NATO sources say a deal could be announced as early as next week. . . .

After that meeting, Rasmussen “asked NATO’s civilian and military experts to prepare a presentation on what the available options are,” a NATO source told Reuters.

“We understand the Russians are doing the same thing on their side. We are talking here about a potential joint operation at the sea,” the source added.

“They are discussing a joint security operation in the Mediterranean for the Cape Ray, to protect it while it destroys the chemical weapons,” said a separate source at the Organization for the Prohibition of Chemical Weapons (OPCW), which is supervising the disposal of Syria’s chemical arms.

Several NATO sources in Brussels confirmed that an operation to guard the Cape Ray is under discussion. . . .

Diplomatic sources said both sides were willing to go ahead with the mission but some issues remain to be ironed out.

They include, among others, a unified command structure or the so-called “rules of engagement”, or response procedures in case the convoy faces danger.