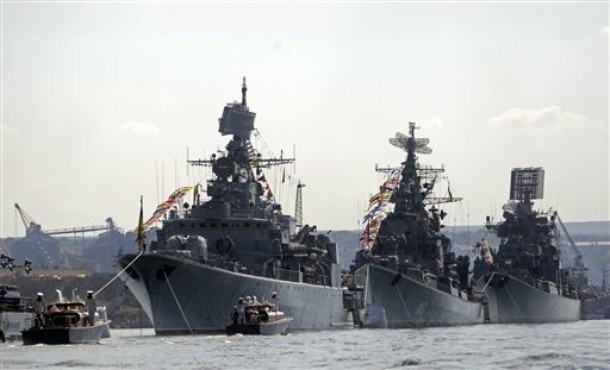 From Reuters:  Russia plans to upgrade its Black Sea Fleet with 18 new vessels over the next decade after a deal with Ukraine to extend the lease on the fleet’s base, a navy source was quoted by Interfax as saying on Monday. …

The fleet has fallen into disrepair and many of the vessels are not seaworthy, but Russia plans to modernise it and add at least six frigates and six diesel-powered submarines, Interfax cited a source in Russia’s naval command as saying.

"In accordance with the State Armament Programme from 2011 to 2020, the Black Sea Fleet will receive 18 new vessels," the source was quoted as saying.

The source said the fleet would also get upgraded Sukhoi-24M bombers to replace older versions now in use. A navy spokesman declined to comment on the news agency report.  (photo: AP)