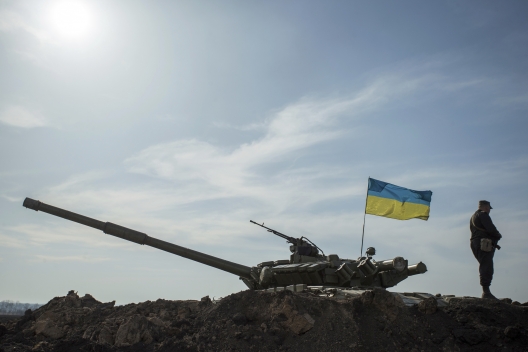 Soldier and tank near border with Russia (photo: Reuters)

Russian forces have been concentrated for possible offensive action on the borders of Ukraine, in vast numbers and in a high state of readiness, according to U.S. Air Force Gen. Philip Breedlove, NATO’s Supreme Allied Commander Europe. In a series of military maneuvers on the Ukrainian border, Russian paratroopers (the VDV corps) and the air force have been preparing to spearhead a possible push deep into Ukraine. The lightly armed paratroops have been training to take over “enemy airfields and airports as bridgeheads of an overall advance.” Such a thrust would be closely followed by the tank and motorized army brigades that have been training and deploying [Rs.] along the Ukrainian border. The Russian Defense Ministry denies that it is preparing to invade Ukraine. It is likely that the Kremlin has yet to issue a final order approving an actual invasion.

If Putin decides to send in his troops, he has a narrow window in which to act. The winter of 2014 in Russia and Ukraine was relatively mild with little snow, while the spring is early and warm. The soil is drying rapidly, meaning that it will soon be possible to move heavy vehicles off of highways and into fields in southern areas of Ukraine close to the Black and Azov Seas. A key date is April 1, which marks the beginning of the Russia’s spring conscript call-up, when some 130,000 troops drafted a year earlier will have to be mustered out as replacements arrive. This would leave the Russian airborne troops, marines, and army brigades with many conscripts that have served half a year or not at all, drastically reducing battle readiness. The better-trained one-year conscripts can be kept in the ranks for a couple of months but no longer. Otherwise they’ll start demanding to be sent home, and morale will slip. As a result, Russia’s conventional military will regain reasonable battle-readiness only around August or September 2014, giving the Ukrainians ample time to get their act together.

Ukraine has scheduled a national presidential election for May 25 that may further legitimize the regime the Kremlin hates and wants to overthrow. The Kremlin may find it hard to resist the temptation to attack Ukraine and “liberate” the south and east while Russia is ready, the Ukrainian military weak, and the regime in Kiev unstable. Such a move could lead to more Western sanctions, but this risk maybe dwarfed by the vision of a major geostrategic victory seemingly at hand.