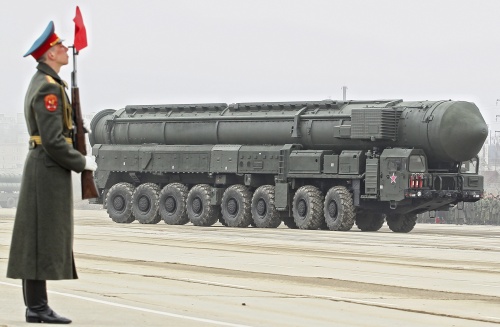 From the Telegraph:  Russia has staged the first successful test-launch of a new intercontinental missile designed to penetrate the defence system now being deployed by Nato despite Moscow’s fierce complaints.

The highly-symbolic launch came just days after alliance formally activated the first stage of a missile defence shield whose deployment Russia has bitterly opposed out of fears that it may target its own vast nuclear arsenal. . . .

A military source told the agency that the launch was only the second ever conducted in the top-secret programme.

The source said the first failed on September 27 when the missile suffered an undisclosed malfunction and crashed six miles from the launch site. . . .

Various sources told Interfax that the new missile was better equipped to penetrate the new US-backed missile defence system in Europe whose first stage Nato official activated at its Chicago summit on Sunday.

"This is one of the … measures being developed by Russia’s military and political leadership in response to the US deployment of a global anti-missile system," former strategic forces director Viktor Yesin told Interfax. . . .

The Russian missile "uses a new type of fuel that helps reduce the time required to operate the propellants in the active stage of the rocket’s trajectory," one military source said.

Officials believe this makes it more difficult to detect and easier to manoeuvre. Interfax said the weapon is also equipped with individual warheads that can change course to avoid being shot down.  (photo: Sofia News Agency)