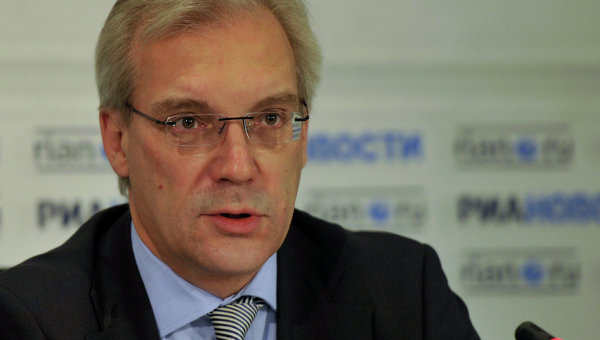 From Voice of Russia:  Both Russia and NATO realize that two such major agents in the sphere of global security – the largest state in Eurasia and the leading military political organization (one must admit it is so) – must preserve a normal relationship and cooperate in the sphere of common interests in today’s world when not only the relationships between countries become global, but also the challenges they face. . . .

[O]ne must not idealize anything, because NATO is a large military organization that has not gotten rid of all the elements tied to its initial purpose, which we all remember. We must be vigilant in these issues and watch NATO’s evolution closely. That is why I would say that there are two aspects today that are of special importance – on the one hand we need to find common ground with NATO and cooperate on the issues where such cooperation would add value. But along with that we need to clean off the layers of the “Cold War” of the past, build up predictability, our military cooperation, eliminate the concerns about the military activity of the NATO countries and move towards the modernized partnership as it was agreed upon during the Lisbon summit that took place in November 2010. . . .

We have also raised questions about the proliferation of NATO, about the fulfillment of certain NATO programs and the increasing proximity of NATO infrastructure to Russian borders. . . .

NATO members call their alliance the most successful one in the history of mankind. That’s debatable. NATO is indeed transforming, but in the course of its transformation it is not moving in the direction of integrating into the common efforts of the international community to create a new system of security based on completely new principles. And sometimes, it even turns into an instrument of legitimizing one-sided decisions.

The bombings in Yugoslavia in 1999 and NATO’s participation in the operation in Libya demonstrate that there is a danger of NATO turning into a “global policeman” that operates beyond the boundaries of international law. Strategically, this issue has not been solved yet, and it’s very important to Russia, because it is going to interact with NATO only within the legal framework, where all member states of the NATO-Russia Council abide by the international laws and respect the prerogatives of the United Nations Security Council. If NATO tries to put itself above international law, the base for interaction will start to deteriorate, and that will become a source of constant mistrust. It’s a very serious problem that we are currently discussing with NATO. We are closely watching the direction of the bloc’s evolution and there are different views on the matter. NATO is not a homogenous bloc; it has countries with a more conservative point of view. Nevertheless, we think that the future of NATO as a structure capable of contributing to European, Euro-Atlantic and Eurasian security depends on the alliance’s ability to operate exclusively within the framework of international law and respect the interests of other countries of the Euro-Atlantic region. These are the key elements for building Russia-NATO relations.