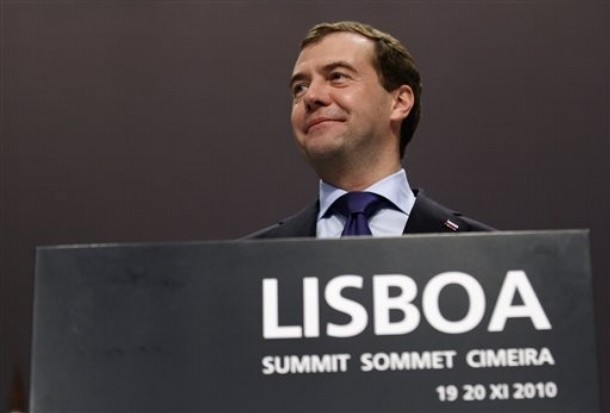 From Edward Cody, the Washington Post:  Russia agreed Saturday to cooperate with NATO on building a U.S.-planned anti-missile network in Europe as part of what was described as a new era in security relations between the former Cold War enemies.

The accord, announced at a NATO summit in Lisbon, symbolized a conclusion by the United States and its main European allies that Russia is not a threat to be protected from but a potential ally in girding the continent against possible ballistic missile attacks from Iran or elsewhere.

"We see Russia as a partner, not an adversary," President Obama said, hailing the NATO-Russian accord.

President Dmitri Medvedev warned, however, that Russia’s cooperation must be "a full-fledged strategic partnership between Russia and NATO" and not just a nod in Moscow’s direction to spare Russian feelings while Europe tends to its own defenses in tandem with the United States.

"Otherwise, it’s a no-go," he said at a news conference here. "Everybody’s clear that the missile defense system will be useful only when it is universal. I’ll be blunt with you, we need to sort it out."

The NATO secretary general, Anders Fogh Rasmussen, said NATO countries and Russia will immediately revive cooperation on theater missile defenses for troop protection and launch a joint, six-month analysis of how Russia could be part of the broader, Europe-wide coverage being planned for deployment in the years ahead.

"This is of real political importance," Rasmussen said.  (photo: AP)