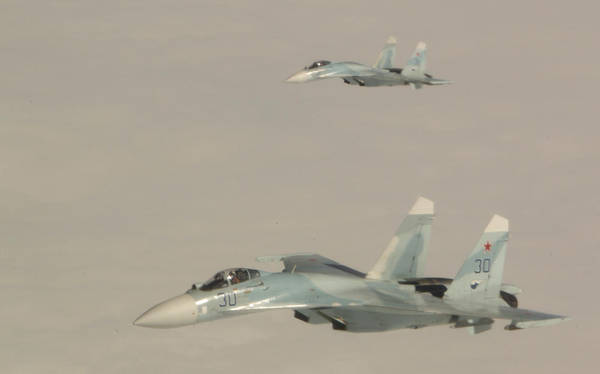 From Dan Elliott, the AP: In a historic first for Cold War adversaries, U.S., Canadian and Russian military officers directed fighter jets and ground controllers to test how well they could track an international terrorist hijacking over the Pacific Ocean.

A chartered American jet code-named Fencing 1220 sent a mock distress signal shortly after taking off from Anchorage, Alaska, on Sunday, triggering a pursuit by at least seven fighters and a flurry of radio and telephone calls between military and civilian officials on both sides of the Pacific.

The Associated Press had exclusive access to Fencing 1220, a plush executive-style Gulfstream whose passengers included a Russian Air Force colonel and a senior commander of the North American Aerospace Defense Command (NORAD), the joint U.S.-Canadian command that patrols the skies over North America.

Their goal: to ensure that two militaries still distrustful of each other can work effectively tackling a terror threat that worries both nations.

One question that arose Sunday was just how much information they need — from the ground, from the fighters, from the hijacked pilots and from the terrorists — and whether fewer, simpler messages might be better than the flood of communication the exercise generated.

Canadian Forces Col. Todd Balfe, the deputy commander of NORAD’s Alaska region, acknowledged it may seem "incongruous" that the exercise was taking place amid tension between his country and Russia over recent Russian bomber flights probing the northern boundaries of Canadian airspace. But with al-Qaida at the front of North American minds and Russia dealing with threats from Chechen rebels, terrorism transcends national boundaries, and exercises like this could lay the foundation for cooperating on other issues as well, Balfe said.  (photo: Ted S. Warren/AP) (via U.S. European Command)