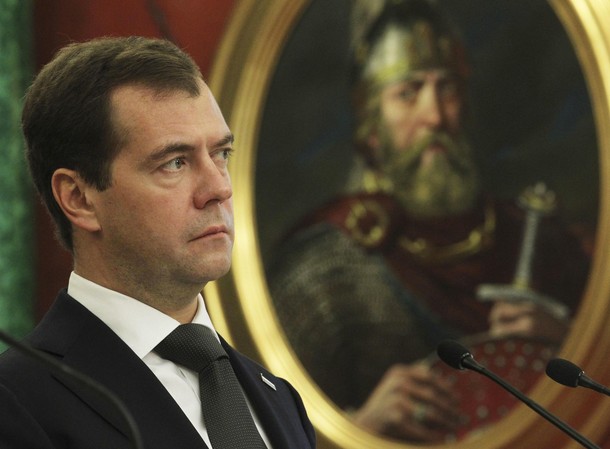 From Gleb Bryanski, Reuters:  A group of retired Russian generals has accused Prime Minister Dmitry Medvedev of indecision during Moscow’s 2008 war with Georgia, the most serious attack on the country’s No. 2 politician since he stepped down as president in May.

The group, which included the former Chief of the General Staff, spoke in a documentary "The lost day" which circulated on the Internet in the run-up to the four-year anniversary of the war.

The criticism comes at a time when analysts are on the look-out for signs that Medvedev, who is increasingly seen as a liability for President Vladimir Putin after the two decided to swap jobs last September, may be further sidelined. . . .

"From my point of view, the Commander-in-Chief should have said one word: ‘Act in accordance with the plan,’" Baluyevsky said. "This primary order is the most important thing and this order was issued with huge delay."

At the time of the attack, then Prime Minister Putin was at the Olympic Games in Beijing.

"I am convinced, until there was a kick from Vladimir Vladimirovich (Putin) in Beijing, everyone here, speaking politely, was afraid of something," Baluyevsky said.

Putin said on Wednesday that the Russian plan – on how to respond to a Georgian attack on South Ossetia – was prepared by the General Staff between the end of 2006 and the beginning of 2007.  (photo: Reuters)