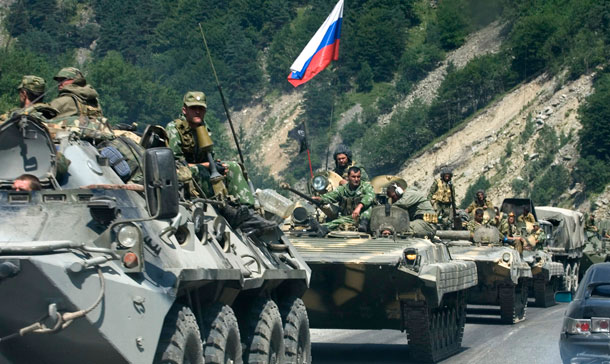 From the BBC:  Russian troops have withdrawn from a Georgian town which they had occupied since a brief war between the two countries in 2008.

Georgian officials said the Russians pulled out from Perevi, which is located just outside Georgia’s breakaway South Ossetia region. …

On Monday, Shota Utiashvili, a spokesman for the Georgian interior ministry, said Russian troops had left Perevi and a Georgian army unit had moved into the town.

The pullout was agreed at the latest round of internationally-mediated talks in Geneva.

From RIA Novosti:  "The Ministry of Foreign Affairs (Georgia) calls this fact a step taken in the right direction. The ‘dis-occupying’ of each village is very important for Georgia and especially for the people living in these villages," the ministry’s statement read.

The Georgian Foreign Ministry said, however, that the removal of Russian troops from the village of Perevi is "only a microscopic step in the obligations Russia must fulfill in line with the August 12, 2008, ceasefire agreement."

From DPA:  But the Russian newspaper Kommersant said Tuesday that the withdrawal was a concession to the West prior to a Russia-NATO summit in November – rather than to Tbilisi.

Russian President Dmitry Medvedev also wanted to make a gesture to French President Nicolas Sarkozy, who mediated between Russia and Georgia during the 2008 conflict, Kommersant said.