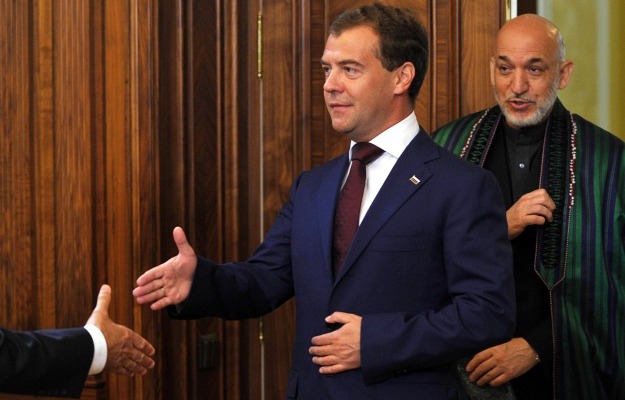 From James Kirchick, Foreign Policy:  [L]ast year Moscow did agree to allow increased transit of supplies to Afghanistan over Russian air space and territory. But this pledge, made just two months after U.S. President Barack Obama announced that U.S. troops would begin withdrawing from the country in July 2011, only illustrates that Russia is preparing for what it sees as a hasty American exit. Russia of course wants to see the Taliban — whose forefathers it unsuccessfully fought in the 1980s — defeated and some form of stability restored to Afghanistan, and in that sense it shares a fundamental goal with NATO. But, and perhaps more importantly, it rejects long-term Western influence in the region, which explains why its actions have been so schizophrenic. Indeed, the Kremlin’s goals may be mutually exclusive: A stable Afghanistan with some form of decent and representative government (ISAF’s stated mission) is hardly compatible with a Central Asian region devoid of an extended Western security presence.

More important than any of these factors, however, is the cynical way in which Moscow will use its paltry assistance to ISAF as leverage with the West in negotiations over other matters, from NATO expansion to human rights to missile defense. More than two years after it invaded Georgia, Russia continues to occupy its neighbor’s territory, rendering meaningless the European Union cease-fire agreement it signed at the end of the war. Its recognition of the breakaway territories of Abkhazia and South Ossetia and distribution of Russian passports to citizens there is a continuing violation of international law. In August, Russia deployed high-precision air-defense missiles to Abkhazia, and it has signed deals to build permanent military bases in both territories. No doubt Moscow will use its token assistance in Afghanistan as a bargaining chip to solidify its position in Georgia, a country whose westward integration both the European Union and NATO have made a priority. Indeed, Russia has already asked that caps be lifted on the number of ”peacekeepers” it is allowed to maintain in the breakaway territories.

At the same time it is insisting that the West ratify its occupation of a sovereign country, Moscow is challenging NATO’s force posture among its own member states. According to a draft Russia-NATO cooperation agreement that Russian Foreign Minister Sergei Lavrov submitted to [NATO Secretary General Anders Fogh] Rasmussen last December, the Russians are insisting that NATO cap the number of forces deployed in Soviet bloc countries (Russia’s so-called ”privileged sphere of interest”) at 3,000 and that it station no more than 24 aircraft in those countries for more than 42 days a year. Such demands represent an unprecedented infringement on the non-offensive military decision-making processes of NATO members.

James Kirchick is writer at large with Radio Free Europe/Radio Liberty based in Prague and a contributing editor to the New Republic.  (photo: Natalia Kolesnikova/AFP/Getty)